Just rediscovered the Unconscious Mutterings meme. It's been a really, really long time since I muttered unconsciously (in print, anyway). So, here goes....

Bicycling is huge in the Austin area.  Won't get into the Lance Armstrong controversy, but this is his place -- the LiveStrong Foundation has its headquarters in Austin.  Biking has always been popular in this region: great weather most of the year, and lots of open roads and tough hills for riding and training.

Now, it's been years since I was actually ON a bicycle (not since the day I almost ran over a guy on a hike-and-bike trail -- a story for another post another day).  But biking is something I used to enjoy a lot, and Michael keeps talking about wanting to get another bike and maybe even train for some competition (which I will NOT be doing).  So we were excited to learn that our little community here in the Hill Country outside Austin has a bike race every March -- La Prima Vera.  It was held last weekend, and we had a lot of fun driving around, following the racers and taking snaps -- these are just a few (click on images to enlarge): 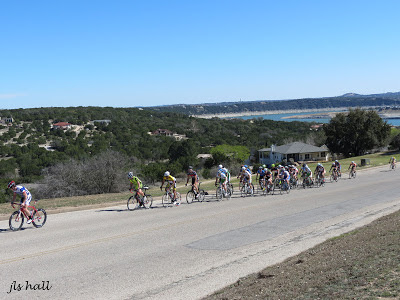 I never could really get a photo of the entire mix of competitors -- they were spread out in various groups.  Above, you can see the main contingent ("peloton"?)  with Lake Travis in the background. 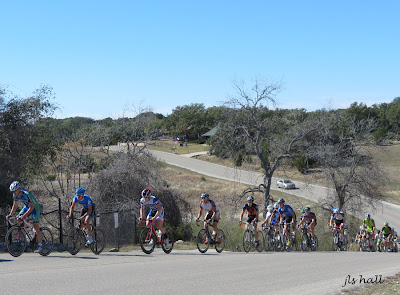 Some of the hills in the area were pretty formidable, which was good for me if a little hard on the racers -- it slowed them down just enough to get some nice shots. 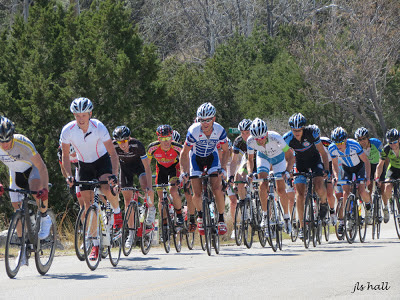 These photos were taken about midway through the race, I believe.  So the racers had another couple of hours to go.  I can't imagine having that much stamina!