Haven't posted anything here at Joysweb in quite a while. But here we go again with a little Sunday Stealing (hosted by Bev Sykes, of Funny the World) — questions lifted from all over the blogosphere. This week's list was borrowed from Hodgepodge.

Hmmm. That's a hard one. Since we retired, the hubby and I do most things together. I like it that way.

2.  What's one product you use that never ever fails?

3. Have you found your place in the world? Where is it?

Well, I'm too old to go looking for another place, so I guess I have found my place. Unfortunately, it seems to be Texas.

Wow! In my long life of movie-watching I've seen some real stinkers, so it's hard to name just one. But one that's certainly in the running for worst movie ever made would have to be Wonderwall — the 1968 British psychedelic film mostly remembered for the soundtrack with music by George Harrison. On the Internet Movie Database I gave it a single star, just to get it into my list of movies I've watched/rated. Definitely meant to be watched when stoned. Good music, awful movie. I waited almost 50 years to see it. That wasn't long enough.

5. What's the last fun thing you did?

This summer has been so hot, we really haven't been out much. So, the only fun things we've done have been pretty tame — like streaming the new season of Only Murders in the Building on Hulu.

Marcello Mastroianni. Sorry. Actually, any kind of spaghetti, although I love ALL pasta.

7. Have you ever been to France? Any desire to visit there, and if so what would site or city would you most want to see?

I've been to Paris once, and always wanted to go back. I'd also love to see more of the country, especially the Côte d'Azur.

8. Have you ever been to Disney, any of the parks at all? Are you a Disney superfan or something less than that? They're open right now so tell us, would you go if you had the time/money/a free trip?

Never been to any of the Disneys. Not a huge theme park fan, Disney or otherwise. I suppose if I was offered an all-expenses-paid trip, I might take it — but it's not really something I'd spend my own money on.

9. Your favorite place to go when you want to be quiet as a church mouse? Would those who know you well describe you as more church mouse or perhaps more like mighty mouse?

I wouldn't say I'm church-mouse-quiet, but I'm not really a blabber mouth, either. I can talk a lot when I've got something to say (just ask my husband!), but basically I'm pretty much an introvert. Don't really have what you'd call a "quiet" place, though.

10. Do you bake your own bread? Last time you had hot out-of-the-oven homemade bread? What's your favorite kind of bread?

I used to bake my own bread once in a while, but haven't done it in many, many years. My fingers are so arthritic now, I'm afraid my kneading days are over. I've always planned to get one of those bread-making machines, but so far I haven't done anything about it. My favorite bread is French bread — soft and chewy on the inside, nice and crusty on the outside.

11. What's something you might say is 'the greatest thing since sliced bread'?

12.  Share with us five little things you're grateful for today. Small blessings. One catch-they all must start with the letter T.

Gotta pass on this one. I'm not religious, but I am superstitious, and the whole "gratitude" thing makes me very nervous.

13. Tell us where you were and something about what life was like when you were 20-21.

Well, back in the Pleistocene, it was really cold and we mostly just hunted mammoths and tried to keep ahead of the expanding glaciers.

14. What's on the menu at your house this week?

No idea. I don't usually plan that far ahead. And we haven't been doing much cooking lately — just eating a lot of salads and sandwiches, to keep from having to heat up the kitchen.

15. Something you recently purchased where a coupon was involved? Do you regularly shop with coupons?

I used to do a lot of coupon-ing. It got to be sort of a hobby. But now that everything is so computerized, all our discounts are digital. Definitely a time saver, but not as much fun.

A New Year of Sky Shots

Wow, January is almost over, y'all. How did that happen? I know the older you get, the faster time goes by, but this is ridiculous. Seems like just day before yesterday when we were pulling out all the Christmas decorations, and here it is almost February! Well, a lot has happened around here since the holidays (more on that later, maybe), but I've still managed to get a few sky shots.

As usual at this time of year, some of the sunsets have been really interesting.... 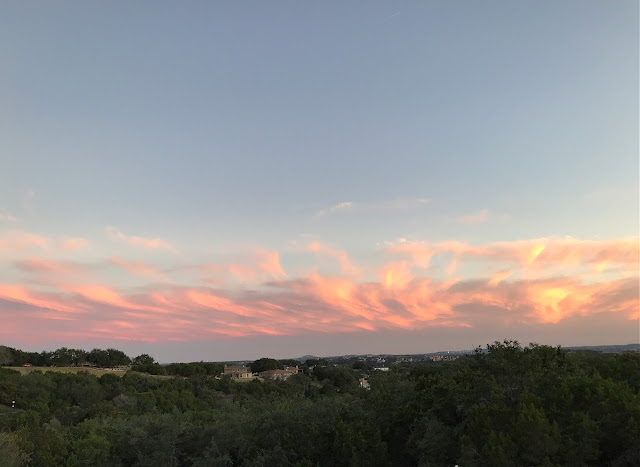 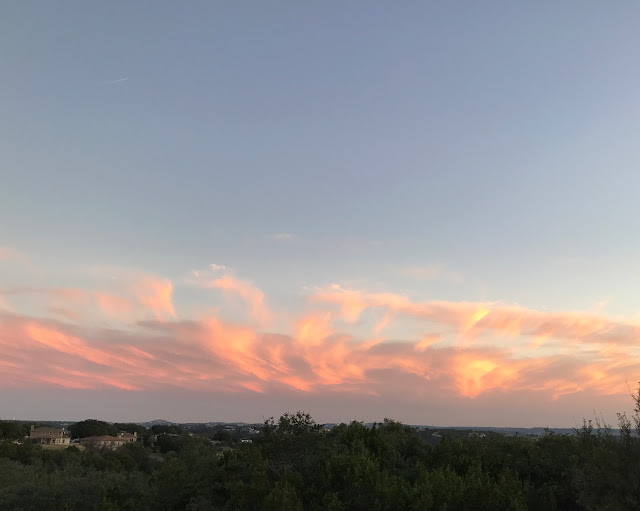 And recently I've actually been up early enough to snap a couple of sunrises, too! 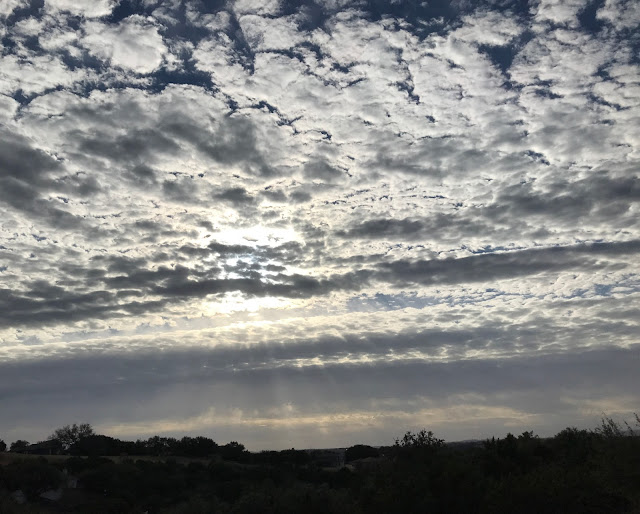 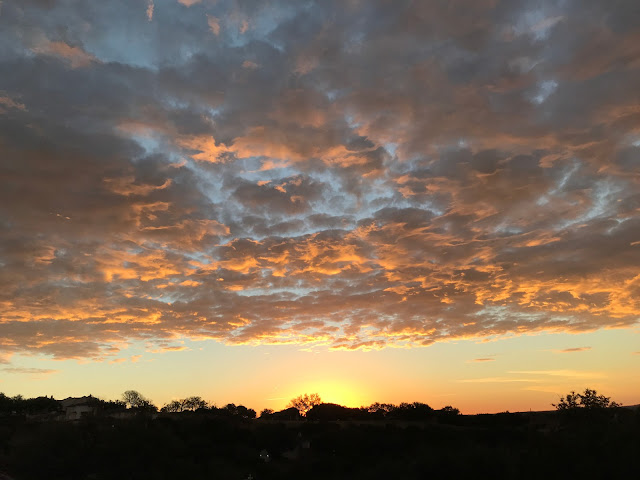 Happy Friday, everyone! Stay safe - and warm!
And keep watching those skies! 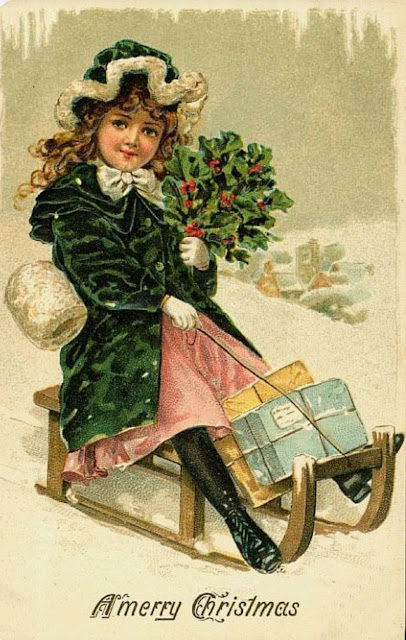 Here in central Texas we're having an unusually warm December, with record highs expected for the holiday weekend. I really hate winter, so that's definitely OK by me. It means my sky shots haven't been very dramatic lately, but I'd trade drama for blue skies any day! Yesterday was absolutely gorgeous.... 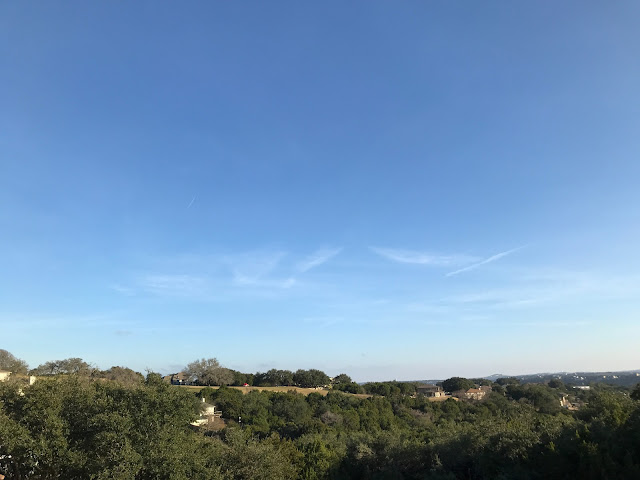 So far, today has brought a little more cloud cover, but that should clear out by afternoon (so they tell me). And even this isn't bad, with the temperature outside already climbing into the 70s. It reminds me of all those hot, humid Christmases we had in San Antonio when I was growing up. Just the kind of winter I love! 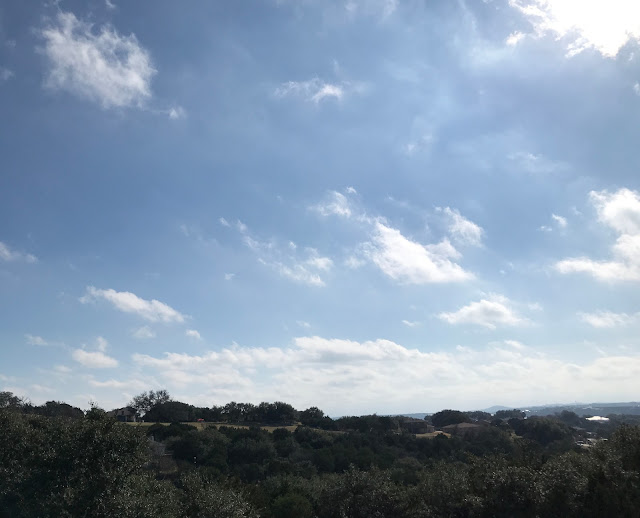