I Suck at Holidailies plus a Saturday Snap

OK, it's official now: I just can't handle Holidailies. I think this is the third year in a row that I've completely bombed out at trying to "regularly update" this blog during the Christmas season. I did have some pretty good excuses this year (two rounds of oral surgery, lots of pain meds which kept me comatose a good deal of the time), but still.... Three years in a row?

Actually, the whole month of December has been kind of weird around here. In addition to the fore-mentioned dental adventures, the weather here in central Texas just hasn't been very cooperative lately. Which is OK with me -- I love the sun and warmth and blue skies. But it did sort of keep me from getting into a festive, Christmas-y mood. It shouldn't really bother me that much, having grown up in San Antonio where Christmas Eve was usually 90-degrees and humid. When we'd gather at our grandparents' house for the family get-together, my grandmother would spend the entire evening yelling at people to "close the door and stop letting all the air conditioning out!"

But now the day has come and gone, I'm (sort of) on the mend (we won't discuss the reaction to the antibiotic at this time -- luckily for ya'll), and I think I'm finally getting into the spirit of the season. Also getting the urge to blog again. Maybe there's life after tooth-removal after all.

So I'm going to try to post to this blog a little more often during the rest of December. Maybe not daily (I think the hubby has planned a few out-and-abouts), but enough to keep me from feeling like such a slacker. Because I know you're all on the edge of your comfy chairs, waiting for my next bit of bloggy trivia.

Well, here's today's. On Christmas Eve, I generally try to take a photo of Michael and me together. Nothing formal -- just a snapshot of the two of us, for my own personal album. Usually with the tree or some of our toys. Neither of us is really great at posing, and even though we both love photography, we both also dislike having our own pictures taken. So it's usually a bit of a struggle. But this year it turned out to be pretty impossible. All of the photos were generally disastrous -- trouble with the lighting, camera timer doing strange stuff, but mostly because in every one of them I looked like I was being tortured. This was one of the worst of the lot, but at least I don't look like I'm ready to punch somebody.

And just one more tidbit. See that skirt? Red-and-green plaid, pleated, rayon-silk blend. I bought that item at Talbot's in downtown Washington DC around 1989. It's older than most of you are, Dear Readers! I've worn it on either Christmas Eve or Christmas Day (or sometimes both!) every year for the last 25 years. One of these days, I'm going to take it out of the closet, and it's just going to crumble into dusty bits and blow away in a poof. It'll give me something to write about for Holidailies!

Linking up with Saturday Snapshot, too. I know that's a terrible snap, so here's a better one. I call this one Michael, the Mail, and the Blue Skies of Christmas: 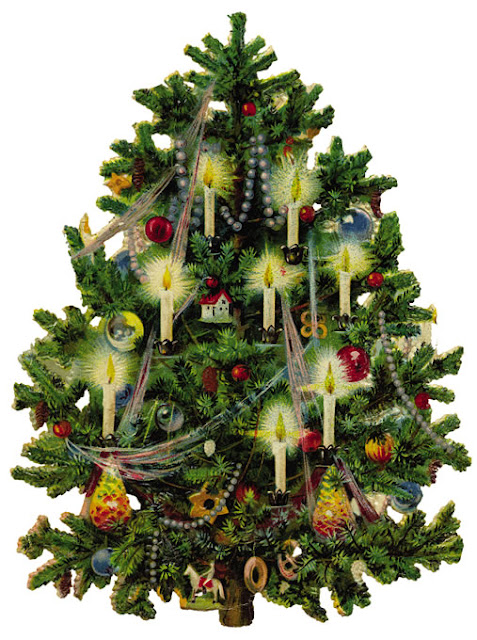 Let the airing of grievances begin!

To see more offerings, or to participate yourself,
please head on over to her blog.

Michael has this thing for model trains. He loved them as a little boy, and he still loves them now that he's a bigger boy. But for most of our married life we've lived in very small spaces, that really weren't roomy enough for even a small model train set-up. He always wanted a train around the Christmas tree, but we generally had a table-top size tree -- again, not spacious enough for a train.

But now that we're living in a bigger place, and have a bigger tree with lots of room around it, he's started accumulating train stuff to play with. A couple of years ago, he got a Polar Express train set, I think (at first) mostly because that's one of my favorite Christmas movies (he's learned to like it too, I believe, after some resistance at first). And last year, he acquired the house to go with the train. (You'll notice that the train is a lovely shade of blue.) 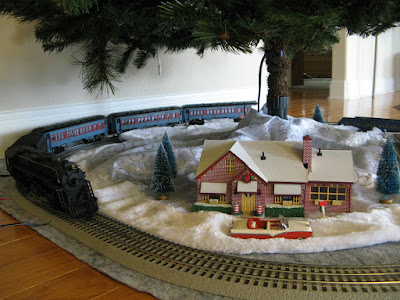 The convertible is one of this year's additions, and just slightly out of place in the snowy landscape -- the driver must be a real outdoor enthusiast. 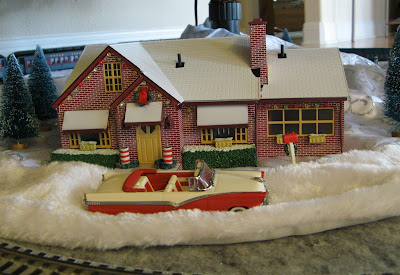 Also this year, he's added some figures -- including Santa -- and a little Santa's workshop structure. Very cute. And (I think because I'm such a fan of the Back to the Future movies) a time machine in a DeLorean! I'm not sure how that fits in with the Christmas theme, but it's one of my favorite parts of the set-up. Now we just need tiny Marty and Doc Brown figures to make it complete. 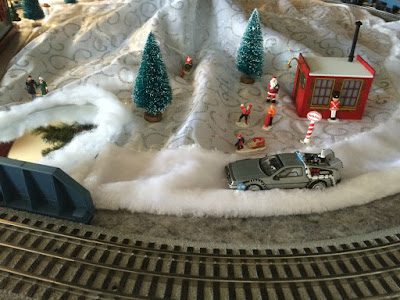 Every year I sign up for Holidailies in December, fully intending to update the blog regularly with a bunch of fascinating holiday posts. Of course, it never works out that way. And this year, here we are already five days into the month and I've posted exactly... nothing. It's not that I'm lazy.... Well, actually it is that I'm lazy. Mostly, anyway. But busy, too.

But I didn't want to let another day go by without putting up some sort of holiday post. So, here's a shot of the hubby putting the Christmas wreath on the front door... 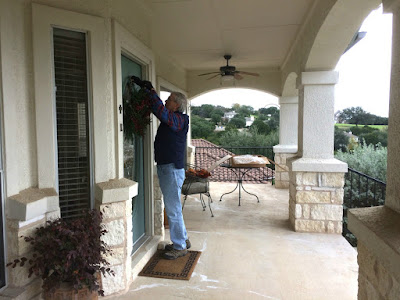 ...and another of said wreath after he got it all adjusted. 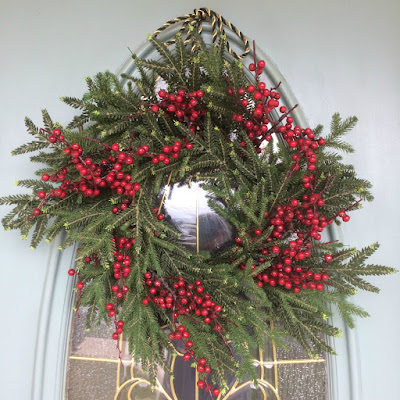 So there we are -- holiday post numero uno.  Merry Christmas! Happy Holidays! Season's Greetings! And more to come!