🌼 Well, M and I are back from the Hawaii trip, and pretty much adjusted to being home again. Honolulu is so gorgeous and I do love going there. But the trip from/to Austin is long and exhausting. Of course, when you get there, you get scenery like this. 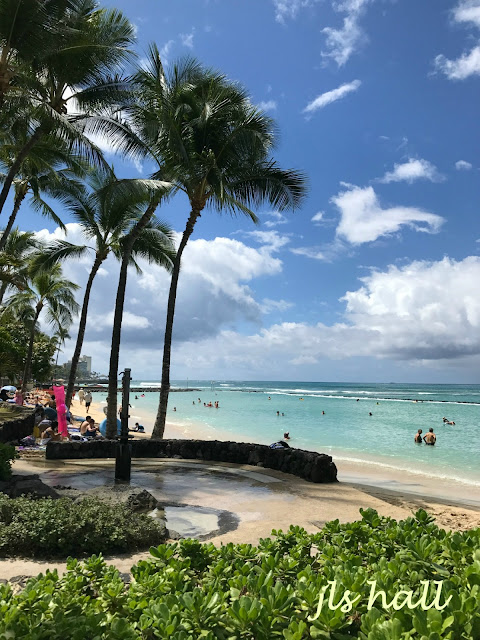 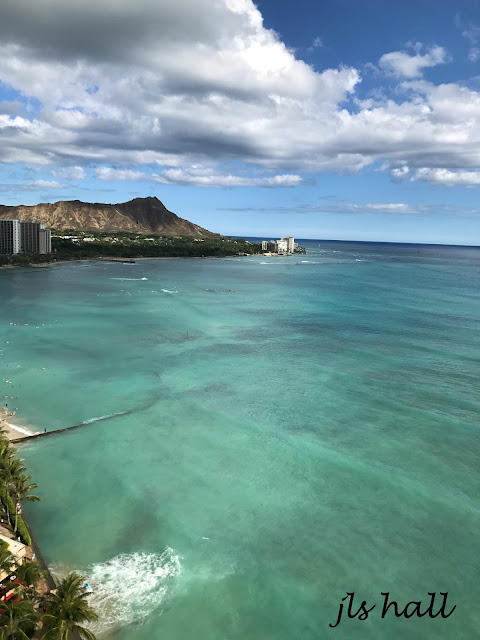 I'm sure I'll be posting more Hawaii photos in the days to come. I took hundreds!

🌼 I had a birthday! Went out for lunch, to celebrate. Just Olive Garden, but hey! — they're just about my favorite restaurant in this area. The Hubs took a photo to prove I was there (I'm usually the one doing the snapping, and therefore often not in the picture). Next time, must remember to remove the eyewear! 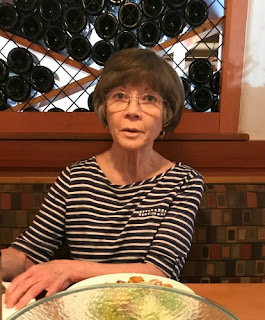 So now I'm over 70! Pretty scary. But Google tells me Susan Sarandon, Sally Field, Diane Keaton, Susan Lucci, and Cher were all born in 1946, too. So I'm in pretty good company.

🌼 I got a birthday card! 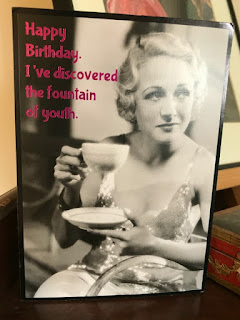 It's from my cuzzie MLB, and really perked me up. An actual card sent through the mail is a rarity these days, at least for me. No one I know sends "real" cards anymore, and e-cards are sort of going out of style too, what with the popularity of texting and Facebook and all the other social media sites. My husband's aunt usually sends cards — her birthday is in September, too. But she and her family live in the Houston area, and were a little preoccupied this year. (They were all fine, although they did have some flooding.)

🌼 The weather here has been really nice since we got home from the trip. Lots of sunshine, high temps in the 90s and not much rain, although it's been very humid. In fact, we've had so much moisture in the air, we got a very pretty rainbow the other day even though there was no actual rain anywhere around. 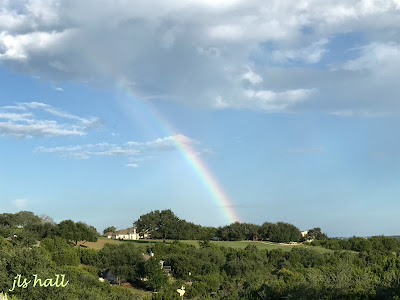 Guess that's it for now. More ramblings next week. Maybe. 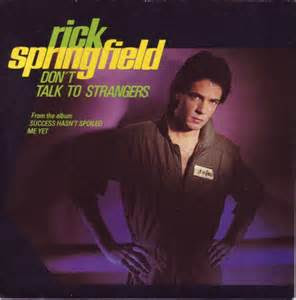 I didn't think I'd heard this song before, but when I went and took a look at the video on YouTube, it did seem a little familiar. I guess it just didn't make much of an impression back in 1982. Which is weird because I was sort of an MTV junkie back then. Never a Rick Springfield fan, though.


1. When did you recently have a conversation with a complete stranger? What did you two discuss?

Well, while we were on vacation recently, I talked to lots of strangers, but didn't have any real conversations with many of them. I think the closest we came was a short exchange we had with the lady who sold my husband a Hawaiian shirt. Turns out, she has a son who's moving to Austin to work for Dell — so she was interested in anything we could tell her. Mention Austin and you can usually get a conversation going.

2. In the video for this song, a woman is having a "hot" conversation on a corded, rotary dial phone in her bedroom. Do you have a landline? If so, do you have an extension in your bedroom?

We do have a landline. And yes, there is an extension in our bedroom even though we never use the phone there.

3. This week's artist, Rick Springfield, says he wrote this song when he was worried that his girlfriend (now his wife) would cheat on him when he was touring. Would you describe yourself as suspicious or trusting?

Probably more trusting than I should be.

4. He became a daytime heartthrob as Dr. Noah Drake on General Hospital. Do you think it would be cool to have a really attractive doctor? Or would it make you uncomfortable?

5. He's discussed how sad he was when, as a boy, he had to leave his dog Elvis behind when the family left Australia. While you were growing up, did your family often move?

Fortunately, no. From birth to age 10, I lived in only two different houses and really only remember one of them. Then after my father died, my mother moved us back in with her parents, and that's where I stayed until I got married and moved into my own place. (That's very sad about Rick's dog. A pet is a family member, and that must have been a very traumatic experience.)

6. In 1982, when this song was popular, Italy won the World Cup. Do you ever watch soccer?

Not often, although I have enjoyed the few games I've watched.

7. "Smiley," the first emoticon, was introduced in 1982. Do you use emoticons in your communication? Or do you avoid them?

I'm not an emoticon user or enthusiast. I don't actually avoid them, I just never think about using them. Probably just a generational thing.

8. The Vietnam Memorial was dedicated in Washington, DC, in 1982. Do you know any veterans of that conflict? If so, tell us about him or her.

I don't really like thinking about the Vietnam War. I don't know many people who served in the military during that period, but I know a lot of people who were affected by the war even though they weren't doing any actual fighting. Some made it through OK. Some didn't. Some of the memories are not happy ones.

9. Random Question:  Your friends are throwing a birthday "roast" in your honor. Which one quality of yours are you sure will be singled out for laughs?

This is a tough one to answer. Honestly, I can't imagine anyone I know throwing a "roast" in my honor. It just wouldn't happen. I don't know any "roaster" types, and I'm not a good candidate for being a "roastee."

Haven't muttered in a while. These mutterings are for the week of September 10th. Unconscious Mutterings is hosted by LunaNiña. And here we go....