Time for a little Sunday Stealing (hosted by Bev Sykes)  — questions lifted from all over the blogosphere.

This week's list is borrowed from Two Drifters and it's all about "Conversation Starters."

1. What do you think is the greatest television show of all time?


Wow, greatest show of all time? Too many to choose from. I guess if I had to pick just one, I'd have to say the original Star Trek. It's been so influential and has had such amazing staying power. I never get tired of re-watching it.

2. Would you rather win a Nobel Prize or an Academy Award?


And the Oscar goes to..... Definitely an Academy Award. I'd just like to thank everyone I've ever met.

3. What one food would you banish from this earth if you could?


Well, I'm not crazy about kale, but I don't know that it deserves to be banished. Just keep it out of my salad.


The tale of the 2016 US Presidential election.

5. Who is the most famous person you have ever met?


Hmmm. I haven't met that many famous people. And most of the ones I have met are no longer with us. Once met Leonard Cohen after a concert in Austin, and took him back to his hotel. Met Townes Van Zant several times over the years. I'm not really a celebrity collector.

6. What’s something you’ve done that most people wouldn’t know or guess about you?

7. You’re strapped in a rocket ship about to go to the moon. Are you thrilled? Or terrified?


Probably both. Or maybe just amazed.

8. What is the correct way for toilet paper to sit on the roll?


With the paper coming over the top and from the front, NOT underneath and from the back. There should be no debate about that.

9. Talk about a mistake you made, or something you regret.


Never learned to play a musical instrument, and really wish I had. Too old to learn now.

10. What would be the best gift I could give you?


I don't really need many material things at this point in my life. I'd like someone to come up with a way to wipe out this current pandemic, before it wipes us out. If you could do that, you'd have my eternal gratitude.

11. What makes you feel better when you’re sad or stressed?


Spending time with the hubby. Almost always works. Unless he's the one making me sad or stressed.

12. What is the most romantic movie you’ve ever seen?


Hmmm. Hard question. I'm not a huge fan of romantic movies – I generally prefer mysteries or action films. I guess I'd say "Somewhere in Time" (with Christopher Reeve and Jane Seymour), or maybe "Doctor Zhivago" (Julie Christie, Omar Sharif, and a great cast).

13. What is the worst date you’ve ever been on?


It's been so many eons since I dated, I've sort of repressed all that. I know there were dozens of really dismal dates before I met Mr. Right. (Who is, by the way, napping in the bedroom down the hall right now.)

14. What is the glue that keeps couples together?

15. What was your first crush.


My first crush was in first grade, and the young man's name was Ronnie (I think). I don't really remember his last name right now, but I'm sure I still have some school photos of him somewhere. As far as I know, he was completely unaware of my feelings, and never spoke a word to me that I can remember. I worshiped from afar.

16. When did your parents talk to you about the birds and the bees?


I don't remember ever having that discussion with an adult. It would have been a big help.

17. What is your greatest achievement?


Well, I'm officially among the elderly now and still getting around on my own. I've been married to the same man for over 50 years. I've never been in jail or rehab. I think those are achievements of a sort.

18. Were you close to your parents growing up?


Very close to my mom. My father died when I was ten and he had been very ill for several years before that. We were as close as his illness allowed us to be.

19. What was the most life-changing event you’ve ever experienced?


Two of them – one sad, one happy. My dad's death and my marriage.

20. Have you ever had a falling out with a friend? What happened?


Not as an adult. I'm sure it happened many times when I was a kid. Making friends gets harder as you get older – or at least that's how it's been for me. I try very hard to do whatever it takes to get along with the ones I've got. 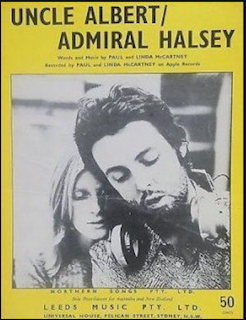 1. The lyrics tell us Paul believes it's going to rain. How's the weather where you are today?


I'm writing this on Friday, May 29th (not Saturday yet), and the weather has been lovely all day. Well, lovely by my standards anyway – mostly sunny, with the high temp somewhere in the low 90s. A little more humid than I like it, but that's OK. I know a lot of people around here are upset about such hot weather in May, but I'm loving it. I try to take a "photo of the day" every afternoon ‒ this is the one for today: 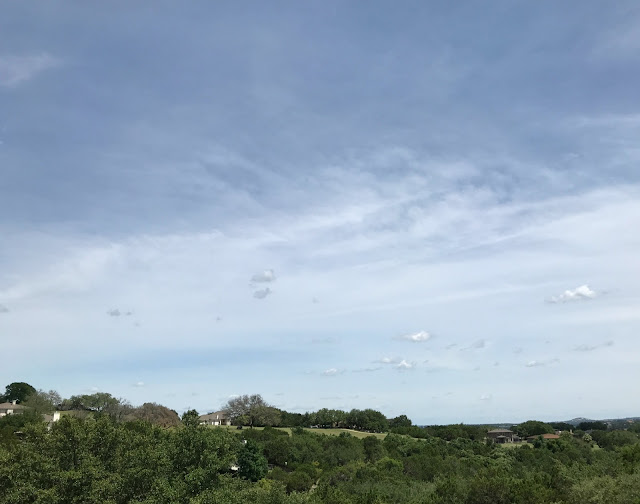 2. Paul sings that he is sorry because he hasn't "done a bloody thing all day." What do you hope to accomplish this weekend?


These days I don't set my sights very high. I'm hoping to get through the weekend with no major dental or medical problems, and no surprise bad news announcements from family or friends.

3. He also references butter pie, which is made primarily with potatoes (with onions and, of course, butter). That dish is not popular on this side of the Atlantic. Last time you had potatoes, how were they prepared (baked, mashed, hash browned, french fried ...)?


Baked, I think. I eat a lot of potatoes, since I had oral surgery not long ago (getting some implants) and there's not a lot I can actually CHEW right now. For the last few weeks (well, more like months), mashed or baked potatoes have been a big part of my diet. Also potato soup. If I ever get this dental adventure over and done with, I would not be terribly unhappy if I never ate another potato for the rest of my life. (I'd make an exception for potato chips.)

4. Linda McCartney is credited as co-writer and performer on this recording. Paul and Linda were partners in real life, too; married 29 years, they raised four children together. They often said they tried never to spend more than a few hours apart. Do you enjoy a lot of togetherness, or do you value your personal time? Has your experience with Covid19 and quarantine changed how you feel about this?


I'd have to say yes to both those choices. I do value time spent on my own, but I love spending time with the hubby too. Also love seeing family and friends, of course – but right now we're still "staying home" and don't really see many people except each other. So the pandemic hasn't really changed the way I feel, but it has changed the way I function.

5. Paul and Linda came from very different backgrounds. His family was lower middle class, lived in Liverpool's public housing and received government aid. She grew up in affluent Scarsdale, the daughter of a wealthy theatrical attorney. Do you think it's more important for a couple to share a common background, or to share common interests?


I don't think there's any strict rule about that. When it clicks, it clicks.


Wow, so many to choose from, but most are also John Lennon songs. Of the songs written by Paul on his own, I guess I'd pick Maybe I'm Amazed, from his first solo album.

7. In 1971, when this song was a hit, Bobby Fischer was the world's most famous and highest-rated chess player. Do you play chess?


No. I've tried, but never have been able to maintain interest long enough to learn.

8. England's Princess Anne turned 21 in 1971. The occasion was commemorated by a formal portrait, taken by celebrated fashion photographer Norman Parkinson. Who took the most recent photo of you?


Probably me. I've taken several selfies lately. By the way, Princess Anne is my favorite royal, after the Queen. The royal family is so entertaining, aren't they?

9. Random question: Do you find it more satisfying to work with your hands, or your head?


Well, I like doing both, but the arthritis in my hands has sort of limited me to more "cerebral" activities these days. But that's OK. Gives me more time for reading.