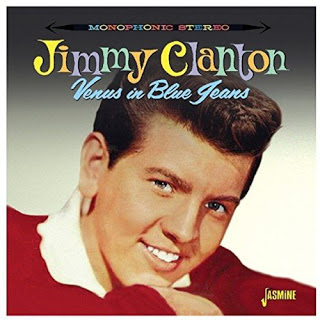 
1. Like the dream girl described in this song, Sam is wearing jeans as she composes this Saturday 9. Is there a lot of denim in your wardrobe?


I wouldn't say there's a LOT of denim, but I do have a few pairs of jeans — mostly the "mom" variety.

2. Jimmy Clanton likens this girl to the Venus de Milo, the ancient Greek sculpture made of marble and now on display at the Louvre. Is there any marble in your home?


Hmmm. I don't think so. Granite countertops in the kitchen, but no marble.

3. He refers to his girl as "Mona Lisa with a pony tail." The Mona Lisa is also at the Louvre. What's the last museum you visited?


I love museum-going, but haven't done much of it lately. When we lived in Virginia, near Washington DC, we used to go to the Smithsonian museums all the time. I guess the last museum I've visited recently was the Blanton Museum in Austin, and that was about three years ago. There's a WWII exhibit in the visitors center at the Pearl Harbor Historic Site in Honolulu, that we toured when we were in Hawaii a few years ago. It's pretty extensive, but I'm not sure if it qualifies as an official museum, though.

4. This girl is so awesome, she's the 8th Wonder of the World! Without looking it up, could you name the other 7?


No. But I know there have been a lot of different lists of "Seven Wonders" through the ages. I could probably list a few of the Ancient Wonders, but I'm not sure about the modern choices.

5. Jimmy Clanton spent his entire professional life behind a microphone. After he quit selling records, he began spinning them as a DJ. Do you consider the sound of your voice one of your better qualities?


Once upon a time, I would have answered yes to this question. But as I've gotten older, asthma and allergies have done some pretty nasty things to my vocal chords. The hubby once told me my voice on the telephone sounded like a parrot squawking. He's such a sweetie.

6. At age 80, Mr. Clanton still performs. He averaged an appearance/month in 2018. Some of his fans were surprised that he has let his pompadour go completely white. Do you color your hair?


Not recently, although I have in the past. Thinking about maybe going a little blonder soon. I would love it if my hair would turn completely white, but I've just got ugly gray patches spreading around.

7. In 1962, when this song was popular, Americans were reading about 5-year-old First Daughter, Caroline Kennedy, and her pony, Macaroni. Tell us about a pet you had when you were very young.


My longest-lasting pet was my toy fox terrier Corky. Got him when he was a few months old and I was about 8 or 9, and he was still around when I went off to college. By then he was more my mom's pet than he was mine. He was a great little dog and used to wake me up in the mornings by jumping onto the bed and pulling the covers off me and onto the floor.

8. Decades later, Caroline Kennedy was the first woman to serve as US Ambassador to Japan. Have you ever been to Asia?

9. Random question: When talking among themselves, who do you think is more open and honest about sex — men or women?


Absolutely no idea how to answer that. I don't have a lot of conversations about sex, honest or otherwise.