The vintage kind. Not mine, darn it – these are from a friend's collection. 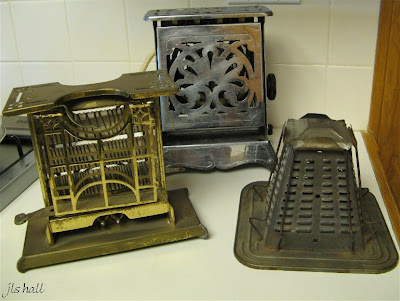 If you'd like to see more ABC Wednesday offerings or participate yourself, please visit the website here: 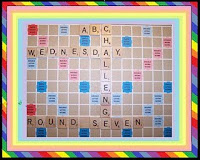 I love taking snaps of old signs, especially old neon signs. And I love the turquoise blue in these shots of a sign I found while M and I were exploring one of the older parts of downtown San Antonio, during our recent trip to Texas. I'm not sure what sort of business it advertised – that "greatest cut" could mean a barbershop, I suppose. The building is a very old one, and it still has shops in it, but none of the original ones. I'm so glad they decided to keep the sign. 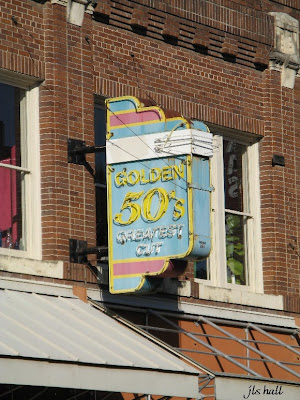 I really like the bright blue graffiti in this one, too. 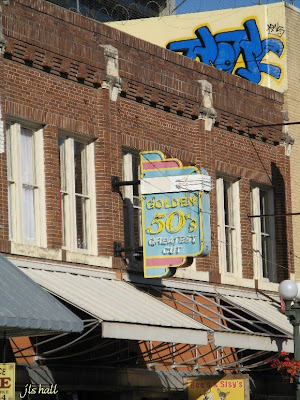 While we were staying in a rented condo in the Texas Hill Country earlier this month, this little lizard showed up on our patio one morning. I just happened to have the camera handy, so I was able to get a snap before he scampered off into the abelia bushes. Also caught a bit of the barbecue grill (which I thought about cropping out, but decided I liked the way it looked so left it in). 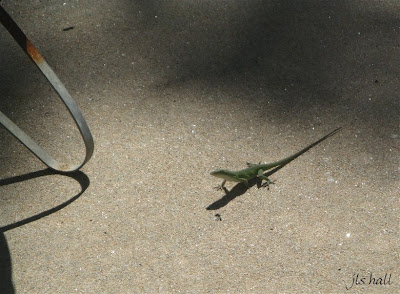 (Click on image to enlarge.)
Shadow Shot Sunday is a weekly photo meme hosted by Hey Harriet.
To see many, many more shadow shots or to contribute some yourself, head on over to her blog. 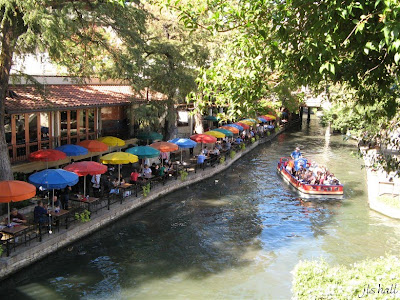 (Click on image to enlarge.)
Here's a shot I took while M and I were in San Antonio, during our recent Texas trip. It's a photo of Casa Rio Mexican Restaurant, on the riverwalk in S.A. It's one of my favorite eateries, even though I hadn't been there for many years. Right after I took this picture, we descended the old stone steps, got ourselves an outdoor table, and had one of the best Tex-Mex meals you can imagine. Casa Rio has been in this same place since 1946, and still seems to be going strong. 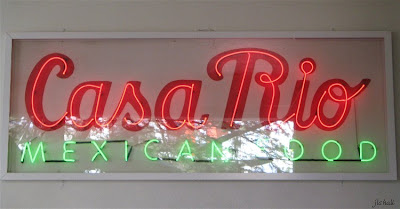 Full Disclosure Statement: I'm not affiliated with or compensated by Casa Rio Restaurant. I just love their food and location!
Posted by jlshall at 11:00 PM 10 comments:

It's been a few weeks since I did a Friday Fill-Ins post. Been doing a little traveling this month, so this is my first FF for November. Hope everyone had a fine Thanksgiving. M and I had a very quiet holiday this year - well, if you don't count all that shouting at the football games on TV, that is. We're both Texas Exes, so the UT/A&M game was a little painful for us. But that's all over now and today is the first day of the rest of our lives and time's a-wastin', so here goes:

1. Three things I must have on my Thanksgiving table: cornbread stuffing, my mother's silverplate, and a tablecloth I can throw in the washer when the day is done.

2. As usual, I spent part of Thanksgiving afternoon sacked out on the couch.

3. This is the day after Thanksgiving. Let the holiday madness begin!

4. The hubby loves to decorate our tiny Christmas tree. And I love to supervise, which works out just fine! 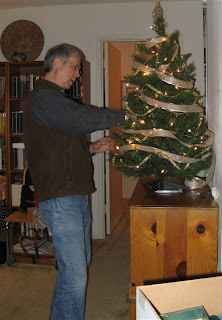 M in decorative mode.
5. Oh, man, thankfully it's not snowing yet. 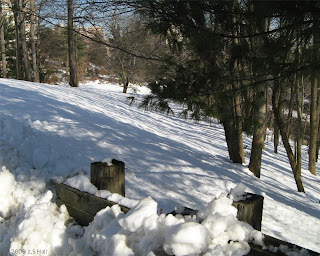 Some of last year's record snowfall.
6. I have yet to perfect the art of _____. (I had a thought there, but it's gotten away from me - there are so many arts I haven't perfected!)

7. And as for the weekend, tonight I'm looking forward to eating leftover Thanksgiving goodies and not doing much cooking, tomorrow my plans include seeing some sunshine for a change (I hope), and Sunday, I want to do some work on my genealogy databases, and get some reading done!
Posted by jlshall at 8:50 AM 1 comment: 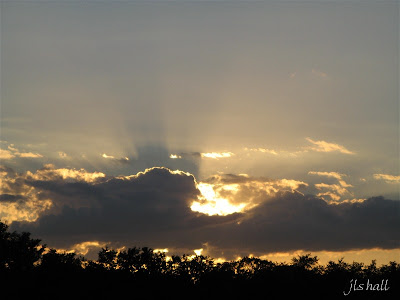 Sunset in the Hill Country near Austin, Texas
November 11, 2010 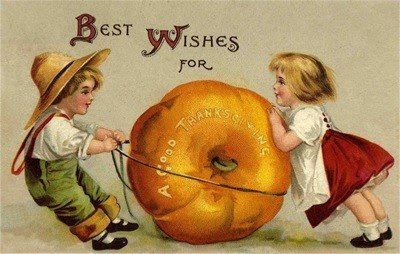 And if you don't celebrate Thanksgiving, have a great Thursday!
Posted by jlshall at 11:01 PM 1 comment: 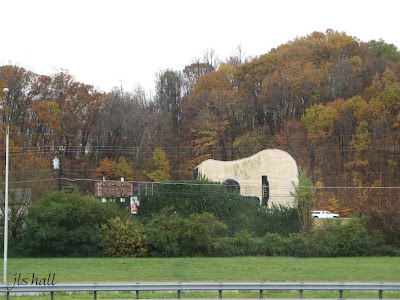 I took several shots of this fence and then couldn't decide which one I liked best, so I'm posting two. First, this one: 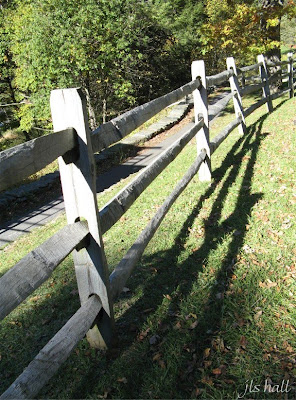 And then this one with a bit of road showing: 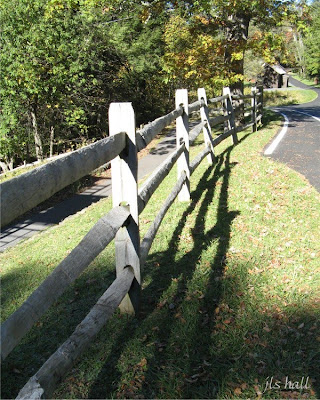 And finally, this is that last one, before I cropped out my own shadow down in the right hand corner: 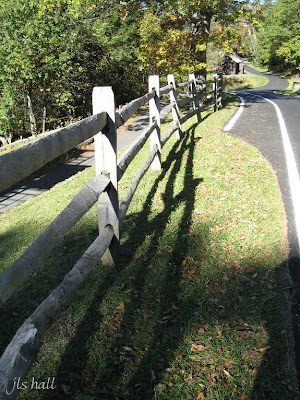 (Click on photos to enlarge.)
Shadow Shot Sunday is a weekly photo meme hosted by Hey Harriet.
To see many, many more shadow shots or to contribute some yourself, head on over to her blog. 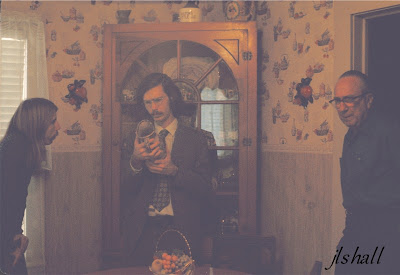 (Click on photo to enlarge.)
I thought this would be an appropriate shot for the season. It was taken at either Thanksgiving or Christmas in 1971 (it's dated December 1971, but I wasn't always great at getting film developed right away). Sorry about the quality, but it was converted from an old slide and had to be cleaned up quite a bit.

That dude in the middle is my husband M, with his younger brother to the left and his grandfather on the right. I'm not sure what it is he's examining with such rapt interest - looks like a pitcher or jug of some kind, and his grandmother did have a large pitcher collection, although most of them were much tinier than the one here.

What a difference forty years can make! Sadly, M's granddad is no longer with us. But he had a good run - lived to be 91 or 92, and did exactly as he pleased most of his life. M's little brother cut his long golden locks ages ago. And the house they're gathered in was torn down several years back and replaced by a giant Whataburger site. Time marches on.

Oh, and M's mustache disappeared quite a while ago, too. That's the one thing from way back then that I don't miss at all!
Posted by jlshall at 9:00 AM 6 comments:

We're on the road for the next couple of weeks, visiting family and friends in Texas. And doing a little real estate scouting too, since M will be (gasp!) retiring next year and we'll be moving back to the land of our ancestors.

So I'm taking a little break from blogging for a few days. Be back soon.
Posted by jlshall at 8:19 PM 4 comments: