Saturday 9: She Works Hard for the Money 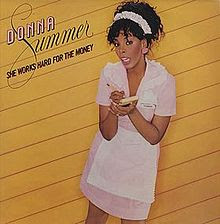 
1. This song is about a woman who works hard as a waitress. What's the hardest job you've ever had?


Well, I spent most of my working life at a desk, behind a typewriter or computer screen — not really what you'd call hard labor. But while we were in college I spent part of one summer helping my husband paint his mother's house. She did pay us, so I suppose it counts as a job (instead of just a mom favor). And that really was hard labor. And it was August in south Texas, so we almost had heat stroke. But we were young and hardy — and stupid.

2. The lyrics tell us she has worked at this job for 28 years. What's the longest you stayed with one employer?


Eleven years. Wanted to quit almost from day one, but the benefits were too good to leave.

3. Donna Summer was inspired to write this song during an awards show. She ducked into the bathroom and met the elderly ladies' room attendant, whose job it was to make sure the room the spotless, the complimentary hairspray and moisturizer was abundant, and there was a hot towel for every celebrity who used the facilities. "Wow," Donna thought, "she works hard for those tips." Who is the last person you tipped?


Hmmm. Haven't really gone anywhere lately. I guess my last tip probably went to the lady who cuts my hair. She works hard for the money, too.

4. Early in her career, Donna was in the touring company of the musical Hair. It played in Munich for so long that she became fluent in German. What's the longest you have ever lived away from home?


Away from home, as in out of this country? Three months — once spent a summer in England. Other than that, I've been away from home for vacations and visits, but never really lived away from home. I even lived at home while I was in college.

Of course, Texans always feel that any time they spend living out of state is away from home — and by that reckoning, I lived away from home more than half my life.

5. Sam's dad is naturally outgoing and enjoys striking up conversations with waitresses, librarians, the checker at the supermarket, etc. Sam is always polite but more private. Are you more like father or daughter?


Daughter. I always try to be pleasant, but I'm not naturally gregarious. The hubby is. I'm trying to be more like him.

6. A little more than 10% of the American workforce is self-employed. Have you ever been your own boss?


I've done some free-lance editing work. Nothing I could have supported myself with.

7. Labor Day weekend may offer a golden opportunity for napping and sleeping in. Do you snore?


Probably, but not enough to be a problem.

8. Will you be attending a Labor Day picnic or barbecue?


We haven't made any plans for Labor Day, so I guess we'll be just relaxing at home. Which is pretty much what we do everyday anyway.

9. Labor Day traditionally marks the beginning of the fall. Will you be adding any new fall clothes to your wardrobe?


I'm sure I will, although I haven't really started thinking about that yet. I know I should get out there right now and start putting together that new fall/winter wardrobe, but I just can't bring myself to admit summer is coming to an end. I don't start looking at cool-weather clothes until the cool weather actually gets here. Maybe November or December. By then, of course, the stores will be selling spring clothing. It's a never-ending battle I fight with the retail world.