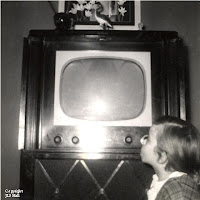 I'm something of a Law and Order fan, although I don't usually watch the first-run broadcasts of the shows – I generally catch the replays and spinoffs on TNT and the USA network. But of all the many permutations of the long-running crime drama, I've never really watched L&O: Criminal Intent much – mainly because I can't stand Vincent D'Onofrio (Oh, no! not D'Onofrio!). Well now, actually Vincent might be a wonderful guy, I'm sure it's just the character he plays that I can't stand. Not too happy about his partner, either; but at least she's usually mostly in the background. And I totally missed the Chris Noth era on LO:CI. Which is too bad because I like him a lot. Mr. Big and all that.

But now I find that Jeff Goldblum has joined the cast of Criminal Intent, and that makes me very happy indeed. For some reason unknown even to myself, I've always been a Goldblum fan. I know he always plays slightly mysterious, weird, arrogant characters. In fact, it's probably that arrogant quirkiness that I like so much. So last night I stayed up late to watch the rebroadcast of his debut appearance (couldn't watch the first run of the show because we were watching a DVD of Quantum of Solace, the latest Bond feature – and that's a whole 'nother story, for some later post).

And Jeff didn't disappoint. As Detective Zach Nichols, he's just as self-assured, quirky – and yes, even a little mysterious – as always. And possessing a nice, laid-back, 60s-survivor quality that is such a welcome relief after the hair-trigger angst of D'Onofrio's Detective Goren. His Detective Nichols solved the crime with an appealing aplomb and lack of histrionics, worthy of Poirot and his "little grey cells." In fact, it seems to me that Goldblum/Nichols may be the closest thing American TV crime fiction has to the stylish British masters like Morris, Dalgliesh, and Inspector Barnaby. Well, that may be stretching things a bit, but it does give me great hopes for the future of LO:CI.
Posted by jlshall at 12:36 PM 2 comments:

And another Friday Fill-Ins is comin' right up!
1. Apparently there's some sort of reason why I'm always late with my Fill-Ins, but I haven't figured it out yet.

2. I wish every day could be a sunny day.

5. For too long I've been much too short.

6. I am not obsessed with chocolate; I am not! Just hand over that Hershey bar, please.

7. And as for the weekend, tonight I'm looking forward to possibly watching one of the Netflix DVDs we've got right now – either "Quantum of Solace" or "Doubt," tomorrow my plans include doing a little spring cleaning and probably watching more basketball than I'd really like, and Sunday, I want to get some reading done!
Posted by jlshall at 4:40 PM 1 comment: 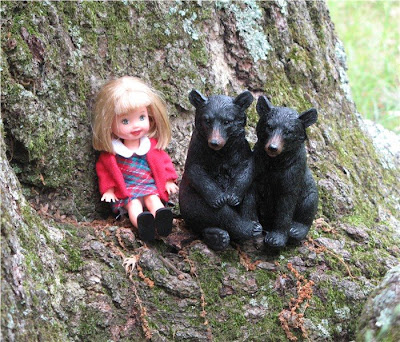 Well, I missed last Friday. Where was I? Can't remember, but I'm back this week. And doesn't it seem like April is flying by much too quickly? Maybe just for us old folks. Anyway, here goes another Friday Fill-Ins:

1. Join me in a little Happy Friday dance.

2. Put a little gin in your day! It'll help you with that Happy Friday dance!

4. Lately I've been feeling perplexed and confused. Could be all that gin and Happy Dancing, right?

5. I'm waiting for the sunrise? a miracle? my comeuppance? Godot?

6. Temptation is hard to resist. With apologies to Oscar Wilde.

7. And as for the weekend, tonight I'm looking forward to trying to finish the book I'm reading and NOT watching another basketball game (playoffs start this weekend, though), tomorrow my plans include shopping and lunch OUT somewhere, and Sunday, I want to get some reading done!
Posted by jlshall at 6:37 PM 1 comment: 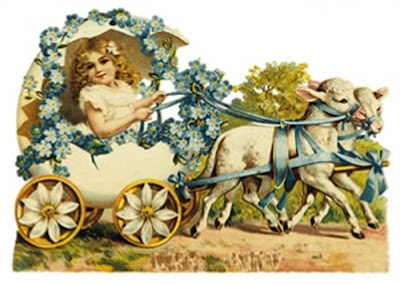 Happy Easter, everyone!
Posted by jlshall at 12:09 AM No comments: 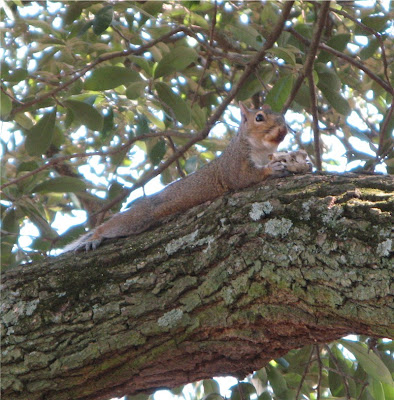 Thanks to Smiling Sally for hosting Blue Monday. For more blue offerings, or to participate yourself, please visit her blog.

As I said last time, I've pretty much run out of blue decor around this place. Except for the dolls. Quite a few of those have some very nice blue outfits. So you may start seeing more dolls than you ever wanted or hoped to see in one lifetime. 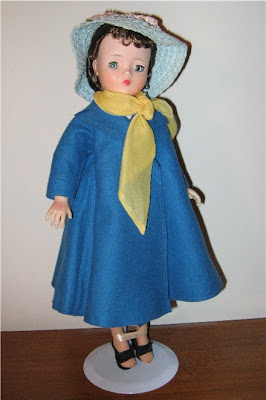 I'll start today with one of my own childhood dolls; in fact, I believe she was my last Christmas doll, back in – well, way back there. I was about eleven that year, and had long since abandoned the notion that all those dolls came from Santa's workshop. But I still loved dolls, and always got a "nice" one at Christmas. And the Madame Alexander "Cissy" dolls were about as nice as they came. Sorry about the lighting – I did this in a rush this morning. And also, please ignore the ribbons around her ankles – it's not some sort of dolly bondage thing; she's just a heavy doll and doesn't stand well in those high heel shoes without help. 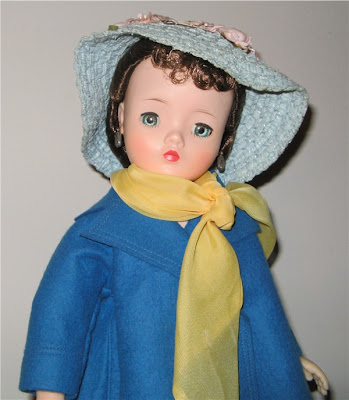 Isn't she pretty? Like all the Cissy dolls, she's about 21 inches tall and made of vinyl. Her outfit is a bit unusual – I've never really seen it documented in any of the doll reference books. But I've found similar outfits on "store special" dolls from the period, and I believe she may have been one of those dolls specially designed for a department store at Christmas time. For some reason, I never thought to ask my mother just where Cissy came from. 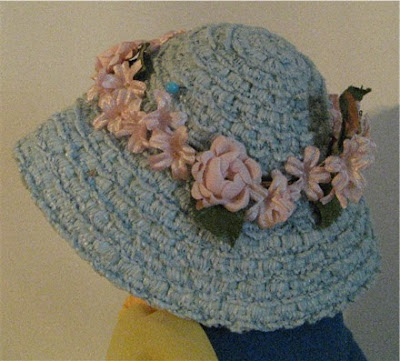 But even though she was a Christmas doll, I've always thought of her as sort of "springy." She's wearing a blue felt topcoat, with a yellow silk scarf around her neck. But her blue straw hat with pink flower trim (and tiny blue hatpin) is definitely a spring-ish item. And underneath the coat, she has on a blue velveteen jumper over a pink silky blouse with pussycat bow at the neckline. Doesn't she look like she's all ready to join the cast of "Mad Men"? 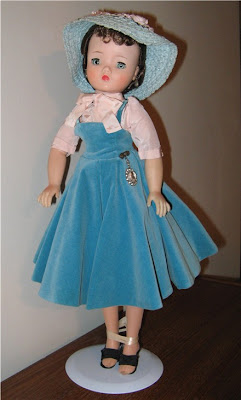 And here's a close-up of the little "diamond" trimmed watch attached to her waistline. 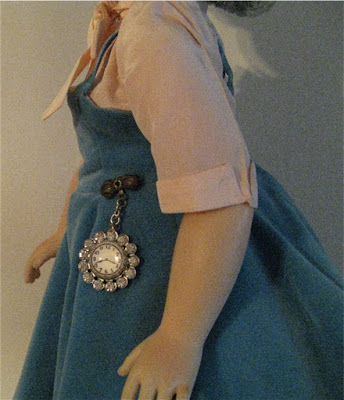 By the time I received Cissy, I was already collecting dolls more than I was playing with them, so she's remained fairly pristine. She was a great comfort to me that Christmas because my father had just died during the summer, and I was still feeling a little bewildered and abandoned. I think I saw her as a bit of reassurance that childhood wasn't completely at an end just yet. Over the years, I've collected several more Cissy dolls, but she'll always be my favorite. 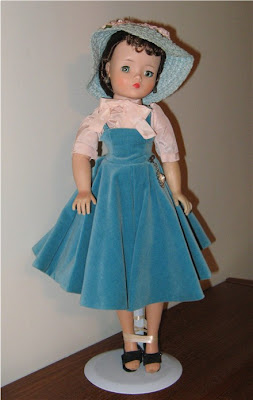 Well, I've already proven that I'm not BEDA material (Blog Every Day in April), as I let the entire day go by yesterday without a single entry here. So maybe I'll be blogging every other day in April. Anyway, today it's time for another Friday Fill-Ins, so here goes:

1. Angel or not, I will not be polishing any halos.

2. "Bend me, shape me / Any way you want me / Long as you love me, it's all right" – lyrics from a Golden Oldie. Does anyone remember the name of the band?

3. As my mother used to say, you're full of baloney. Well, she might have said that. Really, I don't think my mother ever said anyone was "full of" anything. She would occasionally say someone was "a character" or "a futz." I think she got that last one from her sister. I mostly remember her saying things like "don't talk to strangers," "come home right after school," and "get your hair out of your eyes."

4. I usually feel virtuous after I'm done working out or doing something strenuous. That is, until I reward myself with chocolate.

6. A day without coffee is a day fraught with peril.

7. And as for the weekend, tonight I'm looking forward to watching our latest Netflix DVD – "Sense and Sensibility" with Emma Thompson and Alan Rickman and Hugh Grant and Kate Winslet (what a cast!), tomorrow my plans include trying to talk the hubby into going to yet another used-book sale, this time over in Bethesda and Sunday, I want to relax and get some reading done!
Posted by jlshall at 2:04 PM 1 comment:

Blog Every Day in April (Who, Me?)

Over on my Joy's Blog blog, I just posted a note about Blog Every Day in April (BEDA). It's one of those blog events or phenomena that people come up with from time to time, specifically designed to shame me into spending even more time blogging! Even though my poor hubby already has to pry my hands off the keyboard every night, to get me to come fix dinner!

Well, as I said on the other blog, I'm probably the last person alive and computer-ing to hear about BEDA, but if you're here at the end of the tunnel with me, you can read all about it on Maureen Johnson's Blog. She came up with the idea of blogging every day in April, and it quickly spread around the Blogosphere and took on a life of its own. Just one of those ideas whose time had come – like votes for women, or solar power, or Potty Time With Elmo.

Now I can't promise to blog every single day this month. In fact, I'm not really sure why Maureen wanted to set herself and the rest of us up for that kind of stress attack. But it's a cute idea, so I might play along in my fashion ("in my fashion" = slipshod, scatterbrained, hit or miss, etc.). And, paltry though it may be, please accept this as my first BEDA offering.
Posted by jlshall at 9:05 AM No comments: