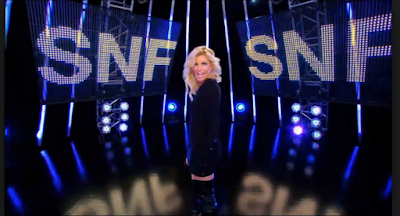 
1. This week's Saturday 9 has a football theme because there's a big game Sunday. Will you be watching?


Probably. We generally do watch the Super Bowl, even though our favorite teams are almost never in it.

2. The Super Bowl is a big day for food consumption in the US, second only to Thanksgiving. What's on your menu this weekend?


I have no idea. We're not having a Super Bowl gathering – it'll just be the Hubs and myself, so we'll probably be having our usual Sunday night dinner. Which could be just about anything.

3. The NFL has decreed that the Super Bowl will never be played in a city that has a median February temperature of less than 50º. Would your hometown qualify for the Big Game?


Well, my hometown is San Antonio TX, and I really don't have any idea what the median February temperature is. Generally, the winters are pretty mild down there, although February can be really icy – at least for short periods. But San Antonio has the rodeo and stock show in February, and I remember attending years ago, walking around the exhibits in western garb and not being terribly bothered by the cold. So yeah – they could probably play a Super Bowl game there in February.

4. This version of the NFL theme song mentions the Steelers and the Broncos. During the regular season, which team do you root for? How did they do in 2019?


How 'bout them Cowboys!!!  I've always been a Dallas Cowboys fan, but I like the New Orleans Saints too. (Used to live in Shreveport.) The Cowboys haven't done very well for about a decade now, and didn't even make it to the playoffs this year. The Saints did a little better, but lost their "wild card" game, so no Super Bowl this year.

5. This version of the Sunday Night Football song is by Faith Hill. She also has ties to the MLB, since her husband is Tim McGraw, son of the Mets' pitcher Tug McGraw. Which sport do you prefer – baseball or football?


I love the Sunday Night Football opening and theme song – sometimes it's the best thing about the game! But I did not know that about Tim McGraw being Tug McGraw's son. How did I miss that? Anyway.... I hardly ever watch baseball – the games just take too long now. I used to like it a lot when I was a kid. My grandmother watched baseball games on TV (or at least, she used to have them on all the time – not sure how much she really watched), and I got hooked. But now I'm much more of a football fan. I do usually watch some of the World Series games, though. Actually, the hubby likes basketball (Go, Spurs!), so we watch more of that than either of the other sports.

6. Faith has performed live at more than one The Super Bowl in the past, performing both "America, the Beautiful" and "The Star Spangled Banner. What's your favorite patriotic song?


Hmmm. Interesting question. Patriotic, as in pro-USA? Probably "This Land Is Your Land" by Woody Guthrie. Would that qualify? Actually, I think my favorite patriotic song is "La Marseillaise," the national anthem of France. Its music is very stirring, although the lyrics are pretty horrific.

7. She has a perfume line with Coty that was a big seller at CVS during Christmas 2018. What's the last item you bought at a drugstore?


I was at CVS just this week. Had to replenish our supply of decongestant – the hubby has a cold. Caught it from me. (So sorry, babe.)

8. Faith Hill is the producer of a talk show on CMT called Pickler and Ben. Is the TV on as you answer these questions? If so, what are you watching?


No TV at the moment. Right now, it's 11am, and we don't usually have the TV on during the morning.

9. Random question: You've got a chip in your hand and three dips to choose from – guacamole, salsa, and onion. Where does your chip get dipped?


First, let me say Yum!  Those all sound really good. I've spent the last few months going through round after round of oral surgery, prepping for implants – and haven't really been able to eat a chip of any kind, with or without dip on it. But if conditions were ideal (and all the implants implanted), I'd definitely go right for the guacamole. Ole!