Our Laurels were gorgeous this year. They're past their peak now, but some of the blooms are still lovely and hanging on.

Around here, of course, "L" is also for LATE, since I'm getting this up on Thursday. (Oops!)

To add your own link,
visit the ABC Wednesday website, here:


Ever since we ended our exile in the North Country and moved back to Texas, the Hubby and I have been talking about planting some bluebonnets. I've always loved our state flower (well, it's blue!) and seeing masses of the lovely blooms popping up along the roadways every spring really helps boosts my spirits out of their winter doldrums. So having my own patch of lovelies has been a major dream.

We scattered wildflower seeds around our place right after we bought it, but nothing ever came of that. And they weren't bluebonnet seeds. But last fall, we pulled ourselves together, managed to find bluebonnet seeds at Home Depot ("guaranteed to bloom"), planted them, watered them, and crossed our fingers. Of course, we were pretty much convinced nothing would come of that attempt, either.

Then, lo and behold, a few weeks ago we started seeing tiny little green plants poking up among the weeds and wild grasses in the yard. Bluebonnets? 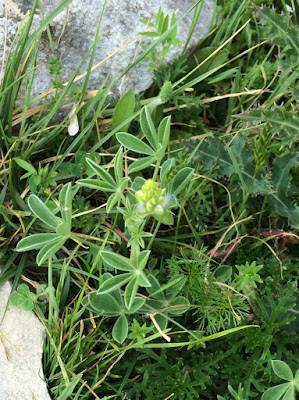 It took a while to be sure, and almost as soon as they started emerging, the new growth was gobbled up by the hungry deer that roam around our neighborhood. (Yes, I know -- deer aren't supposed to like bluebonnets; our deer are idiots.) 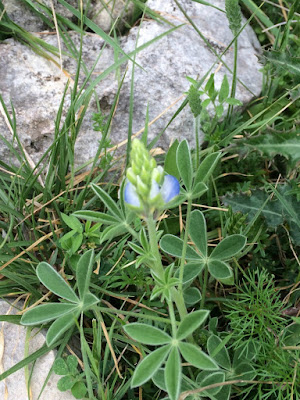 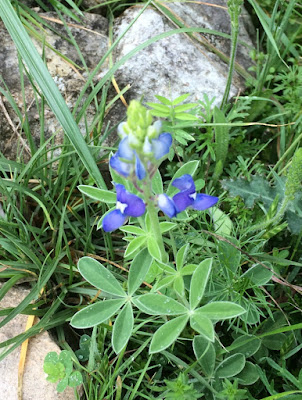 One definite blossom, and more on the way! We were so excited! Our own bluebonnet patch. We would take daily photos to show their progress. Maybe they would spread. Maybe we would have a whole field of lovely bluebonnets! And then....

We woke up Saturday morning to find that the dear little deer had eaten every last flower, leaf, and stem of bluebonnets in the yard. I suppose we were foolish to hope the adorable vermin wouldn't find the plants, even though they seemed well protected on their hillside. And I suppose the only reason they hadn't foraged them out up till then was the fact that we'd been having a LOT of rain lately. The rain kept the deer away and then when the rain stopped, the deer were really, really hungry. So even plants they don't ordinarily enjoy must have seemed tasty. And I guess deer gotta eat.

The hubby, however, is talking a lot about bows and arrows and thinning the herd. Even though, as far as I know, he's never actually killed a deer in his life -- he never had a private field of bluebonnets either.

Just a (very sad) note: I almost didn't do a Blue Monday post this week, after I found out that Sally was gone. But I do think she'd want the meme and the fun to continue. So in honor of Sally of the Eternal Smile, let's just keep it going.