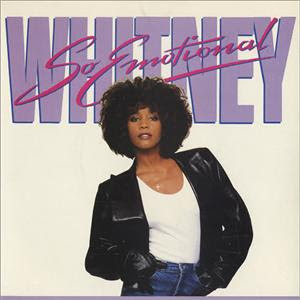 1. Whitney sings that she keeps her lover's photo beside her bed. What's on your bedside table?

No photos, but lots of other stuff. Here goes: A reading lamp; a box of tissues; a little plastic Fendi box that holds my earplugs; my iPad and a charger; a white ceramic plate with a miniature replica of an Egyptian cat sculpture sitting on it; and a stack of acid-free boxes that contain my collection of Betsy McCall paper dolls. And if I'm in bed, my phone will be there too. My bedside table is actually a small file cabinet, so it's a little larger than the average nightstand.

2. She's getting frustrated, waiting for the phone to ring. If your phone were to ring right now, who would you expect to be on the other end?

Well, right now it's around 9pm, and we don't generally get phone calls at this time of night. If we did, it would more than likely be a call from family or friends with bad news. Or a wrong number.

3. The video was filmed at Stabler Arena in Bethlehem, PA. It seats 6,200. As the nation reopens from Covid19, would you feel comfortable sitting knee-to-knee with a stranger in an arena like this?

Definitely no. I'm just not ready for much "reopening" yet.

4. This week's featured artist, Whitney Houston, appeared on the daytime drama As The World Turns. She played herself, performing with Jermaine Jackson at the Miss Cinderella contest in the fictional town of Oakdale. Have you ever been hooked on a soap opera?

Yes, back in the '70s and early '80s I used to watch All My Children religiously. I seem to remember that it came on around lunchtime, and for several years I would come home for lunch everyday (my job was within walking distance) and watch the show while I ate my peanut butter sandwich.

5. Whitney had a sweet tooth, and her favorite breakfast cereal was Fruity Pebbles. Do you often eat cereal for lunch or dinner?

I eat some kind of cereal for breakfast everyday. Never eat it for lunch or dinner, but sometimes I eat a little as a bedtime snack.

6. At Whitney's wedding to Bobby Brown, her bridesmaids all wore lavender dresses and the groomsmen had custom made alligator shoes. Have you ever "stood up" for a friend or relative? If so, do you remember what you wore?

Yes, I have "stood up." Twice. And yes, I do remember what I wore. Sort of. Both were long dresses. One was sleeveless (right, Cuzzie?) and one had elbow-length sleeves. I think both dresses were pink (or pink-ish). And both times, my grandmother made the dress I wore — she was a wonderful seamstress. I've got photos of both dresses, somewhere — if I wasn't so lazy, I'd go look for them.

7. In 1987, the year this song was popular, Cher won the Oscar for Moonstruck. Her most famous line was, "Snap out of it!" When you think of Cher, do you first think of her movies, her TV show, or her music?

Probably her music (I've always loved her voice), but I like a lot of her movie work, too. Never watched the TV show much.

8. Michael Douglas won the Oscar that year for Wall Street. His most famous line was, "Greed is good." His character goes on to say that, "Greed in all its forms -- greed for life, for money, for love, for knowledge -- has marked the upward surge of all mankind." Do you agree?

Sounds right. Unfortunately, I think those greedy urges are also likely to wipe us out. Possibly sooner than I expected.

9. Random question: When you woke up this morning, were you ready to get out of bed? Or do you wish you could have snoozed for a bit longer?

I always feel like I could snooze just a little longer. Never been one to hop out of bed and get going right away. And it seems the older I get, the harder it is to get up at what the rest of the world considers a "reasonable hour."