I wrote this post several years ago for my family history blog, which I've mostly neglected ever since. But as the anniversary date has rolled around again, I figured I'd recycle it for Saturday Snapshot.

❥❥❥❥❥❥❥❥❥❥❥❥❥❥❥
This would have been my parents' 70th wedding anniversary. I wanted to put up a photo in honor of the day, so I went searching through my albums. I knew I wouldn't find a wedding photo because there weren't any. My mom and dad were married in 1942, two months after the bombing of Pearl Harbor and just before my father enlisted in the Navy. It was a sudden decision, with the ceremony performed at the county courthouse – no fancy trappings or guests. And no commemorative photos. 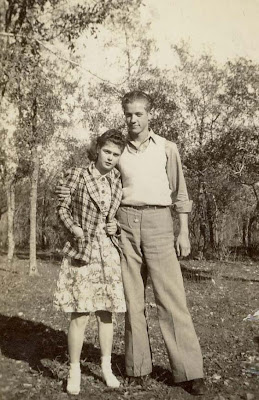 But just finding a photograph of the two of them together was a challenge. Neither of them really liked having their picture taken, so they rarely sat for professional photographers. This shot is one of the earliest I found – taken in 1939 when they were high school sweethearts. They "went together" for a number of years before he popped the question. According to my mom's version of the romantic tale, he told her if she'd just get a job they could get married!

Well, she never got that job – her only ambition was to be a housewife and mother. And it took the uncertainty of a World War to push my father into action. They were happily married for fifteen years – until he died of heart failure a few months before his 37th birthday. My mother outlived him by forty-four years, and never remarried.

Yes, he was very tall – unfortunately, his height is something I didn't inherit. And although in this photo my mother looks like she's dressed herself from Salvation Army bins, she ordinarily had a much sharper fashion sense!

I miss them both.

❥❥❥❥❥❥❥❥❥❥❥❥❥❥❥
Saturday Snapshot is hosted by Alyce of At Home With Books, and as she says: "To participate in the Saturday Snapshot meme post a photo that you (or a friend or family member) have taken then leave a direct link to your post in the Mister Linky. Photos can be old or new, and be of any subject as long as they are clean and appropriate for all eyes to see. How much detail you give in the caption is entirely up to you. Please don't post random photos that you find online."
Posted by JLS Hall at 8:23 AM