If you don't live in Texas, you might not know about the fires that have been raging in Bastrop County, just east of Austin this last week. Around 4600 acres have been burned, and nearly 50 "home-like structures" destroyed. So far, it hasn't been as bad as the 2011 fire which lasted two months and destroyed over a thousand homes -- and I guess that's something to be thankful for. But it's still been a terrible time for the folks who live over there. The fire was extensive enough to send smoke billowing into Austin earlier this week, and we could see it in the distance, even though we live pretty far west of the city. This was the view from our front porch on Wednesday afternoon: 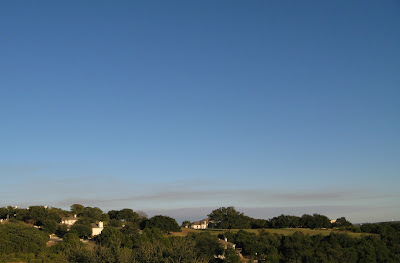 Those aren't ordinary clouds on the horizon -- it's smoke over Austin in the distance. And it hung around all evening: 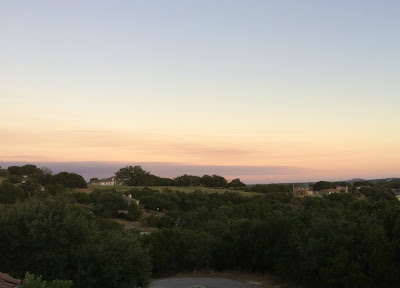 The fire-fighters say they think the fires are about 40% under control now, but a lot of people are still displaced and wondering if they'll have homes to return to. And with the extra-dry conditions we're having this fall, more fires are still a possibility.  I can't believe I'm saying this, but -- pray for rain.

Saturday Snapshot is now hosted by Melinda @ West Metro Mommy Reads.
To see more snaps or participate yourself, just head on over to her blog.
Posted by JLS Hall at 11:36 AM