Weekend at the Movies and Monday Movie Meme

This is the first time I've participated in the Monday Movie Meme hosted by The Bumbles. The topic this week is "all about Dads" and one of the movies I saw over the weekend had a very moving portrait of the relationship between a dad and his son, and the lengths to which a parent will go to ensure his child's safety.

Thanks to Netflix, I'm slowly catching up on the films of Nicolas Cage – for some inexplicable reason, he's one of my favorites. I've been a fan since seeing him in Raising Arizona back in the '80s. Knowing is one of his recent films – released in late 2008, I believe. I missed it when it was in theaters (these days, I miss just about all films when they're in theaters), but after viewing the DVD, I think seeing it on the really big screen, with that too-enveloping surround-sound, might have been just a bit too intense for my fragile nerves. 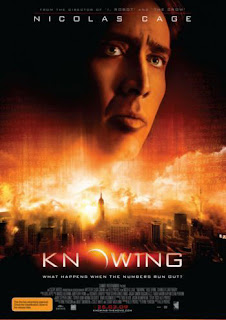 In 1958 [actually, I think it was 1959], as part of the dedication ceremony for a new elementary school, a group of students is asked to draw pictures to be stored in a time capsule. But one of the students, a mysterious girl who seems to hear whispered voices, fills her sheet of paper with rows of apparently random numbers instead. Fast forward 50 years to the present: A new generation of students examines the contents of the time capsule and the girl's cryptic message ends up in the hands of young Caleb [played by Chandler Canterbury]. But it is Caleb's father, professor Ted Myles [played by Nicolas Cage], who makes the startling discovery that the encoded message predicts with pinpoint accuracy the dates, death tolls and coordinates of every major disaster of the past 50 years. As Ted further unravels the document's secrets, he realizes it foretells three additional events – the last of which hints at destruction on a global scale and seems to somehow involve Ted and his son.

Very confused and confusing film. I thought the first half or so was excellent – nice texture, interesting story line, well-built suspense with a slightly creepy feel. Reminded me a little (the general feel – not the plot) of The Mothman Prophecies (a much better movie). However, the second half of the show deteriorated into pretty standard apocalyptic sci-fi – not one of my favorite genres. It relied much too heavily on special effects, enigmatic "presences," and unexplained goings-on (I'm still not sure what was up with all those smooth black rocks that kept showing up everywhere). Another one of those movies where you end up hoping Fox Mulder will finally show up out of the shadows and explain everything for you ("Yes, Scully – I've seen this before. It's probably just a manifestation of yada yada yada.")

I think I'd only recommend this one to other Nicolas Cage fans. Probably not for everyone. The movie is rated PG-13, but I have to say if I were the parent of a very young child, I'd be very wary of letting them see this one. A lot of the special effects are disturbingly realistic. And the whole end of the world scenario is scary and depressing, and might very easily inspire nightmares for some more sensitive youngsters – not to mention some more sensitive oldsters such as moi.

Did you see any interesting movies last week or over the weekend? If you've got anything to recommend, just leave me a comment or a link to your post. And if it was about Dads, you might want to head on over to The Bumbles, and leave a comment there.
Posted by jlshall at 2:07 PM