Doll of the Week

Make that Dolls, plural. And these aren't dolls from my personal collection. At least, not yet. But I've really got to have them. 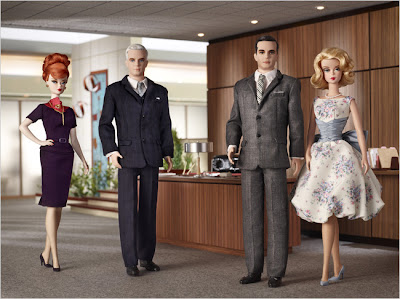 These are the new "Mad Men" Barbies and Kens. From the left, the characters are Joan Holloway, Roger Sterling, Don Draper and Betty Draper. It's interesting (and a little disorienting) that both Joan and Betty have the same measurements. Shouldn't Joan be a little more generously endowed?

The show and Barbie seem like a perfect match. After all, Barbie was introduced in March 1959, and the show's first episode is set in March 1960. And many pundits have pointed out Betty Draper's similarity to the B doll. Apparently, the choice of characters to represent created a bit of controversy, though. The Times article said:

That two dolls [Joan and Roger] represent a relationship outside wedlock, and Don Draper’s propensity for adultery, may be firsts for the Barbie world since the brand’s introduction five decades ago. But for the sake of the Barbie image, her immersion in the “Mad Men” era will go only so far: The dolls come with period accessories like hats, overcoats, pearls and padded undergarments, but no cigarettes, ashtrays, martini glasses or cocktail shakers.

Darn! I would have loved a teensy martini set. But I'm really interested in those padded undergarments, too!

This photo is from the New York Times article about the dolls. As I said, I don't have my own set of the dolls yet. They don't go on sale until June or July, and they're listed at seventy-five bucks each. A little expensive, I guess, but I'm definitely putting them on my wish list.
Posted by jlshall at 12:53 PM