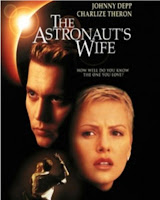 Astronauts Depp and Cassavetes are on a mission to repair a damaged satellite when NASA loses contact with them for two minutes while they're outside their ship. Returned to earth, they seem unharmed until Cassavetes dies of a massive stroke a short while later. After Depp and wife Theron move to NYC where he takes a job with an engineering firm, she begins to notice changes in his behavior. Things turn scary after she gets pregnant and starts having misgivings about the pregnancy. Then she’s contacted by a former NASA employee who says he has secret information about the “accident” in space and about the twin babies she’s carrying. After that, the real weirdness breaks out.

Rosemary’s Baby with space aliens instead of witches. So I guess it’s appropriate that Charlize Theron looked like a taller 1990s version of Mia Farrow in that movie. But I’m not sure why Johnny Depp was got up to resemble Val Kilmer in Top Gun – and the Mississippi farm-boy accent seemed to be a real on-again/off-again thing. Maybe the alien presence decided it didn’t want to sound so much like Elvis all the time.

This was a visually stunning film – the set decorators must have had a blast. I thought the two stars turned in mostly pretty wooden performances, but the supporting cast was very fine. Well, to give him his due, Johnny Depp really wasn’t on screen that much – it was definitely Theron’s film. I thought Blair Brown and Tom Noonan were excellent as the older couple – the Roman and Minnie Castavet roles, I guess. I know, I know – Rosemary’s Baby again. But it sort of fits. And with Nick Cassavetes (son of John Cassavetes and Gena Rowlands) in the cast, the comparison seems inevitable.
Posted by jlshall at 3:36 PM