Actually more than one photo today, and not entirely random. 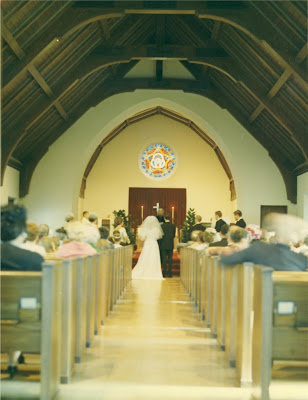 Several centuries ago, on a planet far, far away . . . there was a teenage wedding and the old folks wished them well. Oops! Sorry, but I always slip into Chuck Berry mode when I think about our wedding; because while M was twenty and very nearly a grownup, I was still just nineteen and nowhere near as sophisticated as I pretended to be. 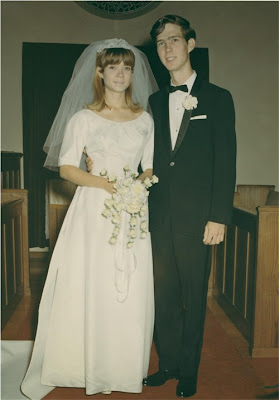 And that part about the "old folks" wishing us well – I'm sure they did. But it was hard to tell because most of them simply sobbed through the entire ceremony. We had one of the weepiest weddings in history – mostly, I think, because we were so young and looked even younger. Even my maid of honor – who was also my aunt – wept. I'm told even my father-in-law brushed away a tear or two. But M and I were happy – we were having a lot more fun than we'd thought we would. 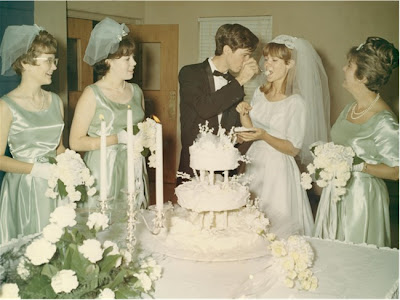 The bridesmaids' dresses looked much better in real life than they do in the photos. But that peau de soie must have been unbearably hot in the Texas summer. Sorry, girls.
We almost didn't have a wedding at all – not a real wedding ceremony with the white dress, the cake, and the reception in the church hall. When we decided to get married before moving to Austin for our junior year of college, we assumed we'd just go down to the courthouse in San Antonio and sign the papers and that would be it. Well, it was the '60s and we were on our way to being hippies and were really trying to avoid all that middle-class bourgeois establishment tradition. But when our mothers heard "no wedding," they were so obviously devastated, that we had to relent. I guess even radical "freaks" (as we thought of ourselves back then) want their moms to be happy.

So, getting back to the point. One very hot and rainy day in late August, back in – well, about 256 years ago, if my calculations are correct – M and I got hitched, in a small but lovely Presbyterian church in San Antonio, Texas. I had my auntie and my little cousins as my attendants, and M had his three best pals backing him up (they'd taken him out the night before and gotten him completely blotto, but he still made it to the church on time). We survived the heat and the rain showers, and the fiasco of the wrong flowers being delivered. And M didn't smack me or even get mad when I kidded him after he stumbled over his vows – although we'll always remember that my first words to him as his wedded wife were "You blew it!" 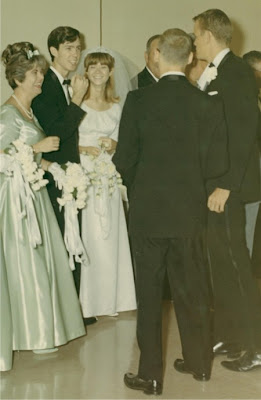 It's not really polite to threaten your Best Man
with physical violence in the receiving line, Dear!

And I wouldn't be at all surprised if that was what he was feeling about the whole venture right about then. But after all these eons together, I think we've both long ago come to realize that we really didn't blow it – we made exactly the right decision. Even though one of us was still just a teenie-bopper.

So, as Chuck Berry also sagely said, "C'est la vie, said the old folks / It goes to show, you never can tell!" 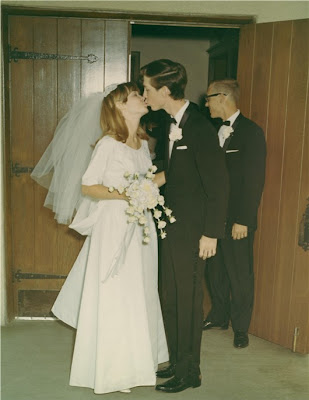 I know it doesn't look like it, but he really had kissed me once or twice before the ceremony!
Posted by jlshall at 5:30 AM