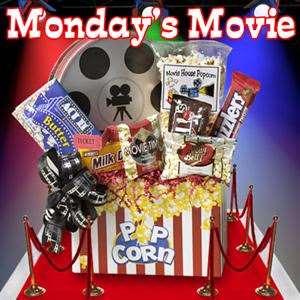 A Novel Menagerie hosts Monday's Movie every week, and invites everyone to "write about any movies, television or big screen, that you’ve seen over the past week."

This wasn't a huge movie-watching week for us, as we were at the beach for most of it and had other activities to keep us busy. But last weekend, we did manage to watch one new movie on DVD (new to us anyway), although (as usual) we didn't go out to see any. For some reason (well, for many reasons, actually), it's getting harder and harder to drag myself out to see a movie when I can wait a few weeks and see it on DVD in the comfort of my own living room. Without all that chatter from the people sitting behind me. And without all those cell phones going off at crucial moments. And the popcorn is fresher, too.

Anyway, back to the subject. 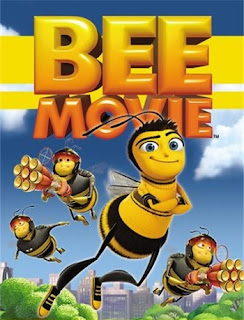 
From creator Jerry Seinfeld comes "Bee Movie," a comedy that will change everything you thought you knew about bees. Take a close look at the world through the eyes of one bee in particular – Barry B. Benson (Jerry Seinfeld). A recent college graduate, Barry wants more out of life than the inevitable career that awaits him and every other worker in New Hive City – a job at Honex . . . making honey. Barry jumps at the chance to venture out of the hive, and soon encounters a world beyond his wildest dreams. When Barry inadvertently meets a quirky florist named Vanessa (Renee Zellweger), he breaks one of the cardinal rules of beedom – he talks to her. A friendship soon develops, and Barry gets a guided crash course in the ways of the human race. When he shockingly discovers that anyone can purchase honey right off the grocery store shelf, he realizes that his true calling is to stop this injustice and set the world right by suing the human race for stealing the bees' precious honey.

My Thoughts:
I really wasn't expecting much from this one. Without the added surrealistic-neurotic influence of Larry David, I thought Seinfeld's humor might be a little too whimsical and cutesy for my taste. But I like animated films, so I decided to give it a try, and was pleasantly surprised. If you liked Seinfeld the TV show, then you'll probably like Bee Movie. It has the same kind of humor, and quite a bit of the same edge.

Barry B. Benson is recognizably Jerry Seinfeld, and much of the movie echoes the old TV show's plots and story lines. Even the parental units seem familiar – especially when Barry's mom (played by Kathy Bates) hopes that his new girlfriend is "Beeish," or when she sees him in court on TV and says (in the way of mothers everywhere, I suppose), "I wish he'd dress like that all the time. So nice!"

I think my favorite character was probably Ken, the human boyfriend of Barry's love interest Vanessa. Ken is played by Patrick Warburton who also played David Puddy on the Seinfeld show. Puddy was always one of my favorite Seinfeld characters, too – and Ken and David are obviously related. At one point, when his dating schedule is interrupted by the bee crisis, Ken loudly moans, "Why does yogurt night have to be so difficult?" Pure Puddy, that.

I'm rating this one four bags of popcorn out of five. I think it's definitely one I could happily watch again.
Posted by jlshall at 9:36 AM