Another new meme for me! The Saturday 9 ("Just A Silly Meme on a Saturday!") is hosted by Sam Winters. Nine questions posted every Saturday — sometimes random, sometimes with a theme. This week, the theme is Petula Clark's Don't Sleep in the Subway. 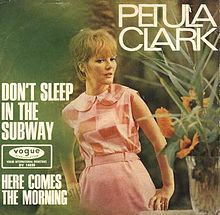 Well, that was fun. But now I've really gotta stop all this meme-ing, and get my morning workout done!