Saturday 9: The Theme from Gidget 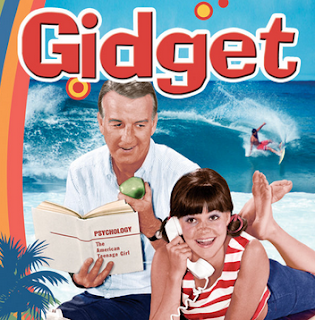 1. Gidget was a sitcom that ran only one season. Have you ever seen it?


Yes, it was one of my favorite shows when I was a teenager. I watched it as much as possible, but that was a really busy period in my life and I'm sure I didn't see every episode. I've always loved Sally Field. (Have to admit, though — I really didn't remember this theme song.)

2. Gidget is a high school student who is more interested in surfing and boys than in the books. When you were Gidget's age, was your top priority getting good grades? Or were you more involved in the social side of student life?


I'd have to say both. I was always focused on getting good grades, but I was pretty social too.

3. Gidget's father was nearly always unflappable when it came to his daughter's high-spirited shenanigans. Who is the coolest, calmest person you know?


That's a tough one. I know lots of "cool" people, but none of them are especially calm these days. Strange times, y'know?

4. Gidget spends as much time as she can at the beach, hanging out with her best friend Larue. Fair-skinned Larue doesn't share Gidget's passion for surfing and prefers to stay on the beach blanket, wearing a floppy hat that protects her from the sun. Are you a sun worshipper? Or, like Larue, are you careful about your exposure to the sun?


Again, both. I love being in the sun, but I definitely try to limit my time out there. (Larue is an interesting name. I once worked with a girl named Larue. She hated her name.)

5. Gidget, the quintessential California girl, was created by Freidrich Kohner, an Austrian-born screenwriter. Can you think of another Austrian import?


Well, there's Ah-nuld — Arnold Schwarzenegger is originally from Austria. And my great-grandfather was born in Austria (and died in Texas, 84 years later).


Hey, I'm sitting here in my jammies, playing with an almost defunct blog that hardly anyone reads, answering questions about a sitcom that no one has seen in over 50 years. So don't get me started on "feeling foolish."

7. This is the show that introduced Sally Field. She went on to win two Oscars and four Emmy Awards. When you think of Sally, what role comes to mind?


As I said, I'm a real fan of Sally Field. I've always found her very easy to identify with — we're the same age, we're both "petite," and we have similar hair (mine's a little lighter). And she's funny. I think she's a very good actress, and she's been in some of my favorite movies. So I don't really associate her with any one role. But if I had to pick one, I'd probably say the reporter she plays in "Absence of Malice" was my favorite.

8. Today Gidget is a grandmother. Sally reports that her grandchildren especially enjoy "sleepovers at Granny's." Where were you the last time you spent the night away from home?


Hmmm. We haven't gone anywhere this year, so I guess the last time I was away from home overnight would be last September when we went to Hawaii. We need to get out more.

At home with the hubby. A good book to read. Sunshine, no emergencies, no errands, no plans. And somebody else does the cooking.