I've been neglecting my Joysweb blog recently, concentrating on my book blog (and not doing a very good job with that one, either). Well, I've had this awful cold for the last week or so, and haven't been doing much of anything besides blowing my nose and sleeping. But I know that's not a very good excuse – I'm just getting lazy now that summer's here, I suppose.

M and I spent the July Fourth weekend at Shenandoah National Park – that's getting to be a tradition with us. We stayed in a cabin in the Canyon area of the Skyland region of the Park, with a great view of the Shenandoah Valley, and got to see lots of fireworks spread out across the valley on the evening of the 4th. I have to say, though, the display put on by the hundreds of fireflies outside our cabin door was almost as spectacular, if not quite as colorful. 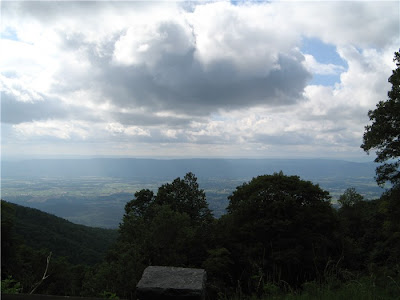 The view from our cabin at Skyland.

I call it a cabin, but they're really more like motel rooms – not terribly rustic (ours came equipped with a big-screen TV and complimentary Starbucks coffee), although fairly secluded and very spacious. 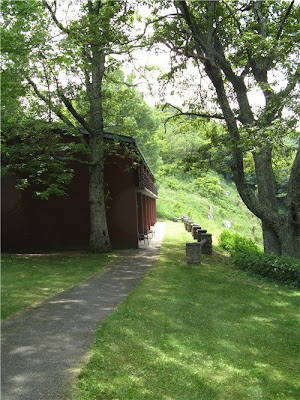 The "Canyon" range of cabins.

Not, of course, what my hubby would prefer, but he's learned over the years that I'm just not a camper. M has fond memories of Scout camps and boyhood summers spent at his grandparents' place in the Texas Highland Lakes area. Swimming and canoeing and building campfires by rubbing sticks together. He'd love to just hike into the woods, put up a tent and spend a couple of weeks fishing and cooking his meals over an open flame.

Me, I'm a city girl – never really got the hang of the outdoor life, although I can very happily look at it for hours! But as far as I'm concerned, you're never really on vacation until you've ordered room service at least once.

So, for us, the cabins and lodges at Shenandoah are a nice compromise. Didn't get to do a lot of hiking this time because the weather wasn't terribly cooperative, but we did go on one fairly long hike that we'd never done before: the Pocosin Mission hike. If you're familiar with the Park, it's in the Central District and it's one of the easier hikes – only 1.9 miles round-trip (although it's uphill all the way on the way back!), and the trail is along a fire road which makes the walking easy. It ends up at the ruins of an old house which was part of an Episcopal Mission there, alongside more ruins from the remains of the old church. 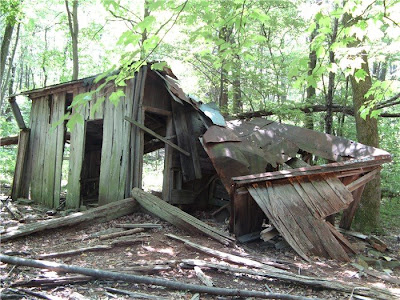 Ruins of the old house. 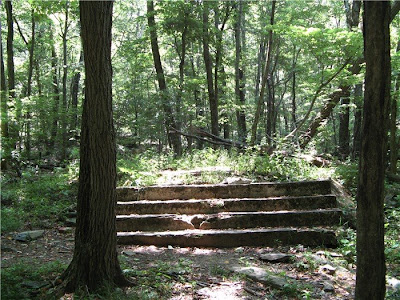 The old stones steps are almost all that remain of the old church.

A little farther along is an abandoned burial ground with some very eroded tombstones. I'm including a couple of photos from that area. The graves were very interesting – almost hidden by the foliage, with only the vaguest traces of inscriptions remaining. I spent quite a while looking around and taking pictures. Of course, M waited until we were back in the cabin before telling me that the graveyard was one of the places in the Park where we were most likely to encounter snakes! 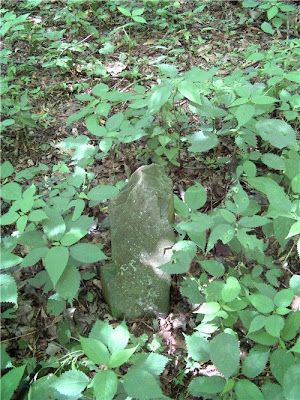 One of the graves in the abandoned burial ground. 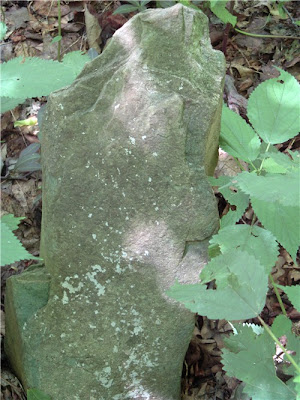 Close-up of the gravestone - it almost looked like there was an inscription,
but it was too decayed to read.