Random Photo Monday: A Salute To Our Fathers

Well, these photos are really not exactly random. For my first Random Photo Monday post in quite a while, I'm putting up a couple of family shots. Both taken during World War II – my father in his Navy whites (with the sun in his eyes, darn it!), and M's stepdad in his Army uniform. Handsome dudes, weren't they? 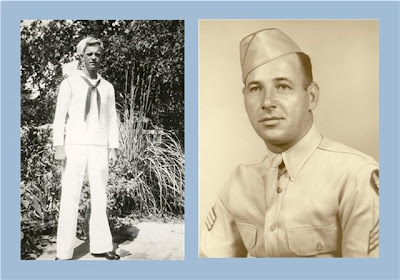 The strange thing is that both were born in the month of October, and both died in the month of July – my father on July 12th and M's on July 4th (holidays tend to be rather traumatic in both our families).

[Cross-posted at Children of the Lone Star.]
Posted by jlshall at 9:59 AM