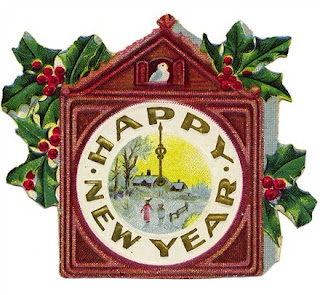 M and I have been having a running argument about whether or not this is the last day of the decade. He says it's not - that next year is actually the last year of the 2000s because by rights the new century started in 2001. Of course, this is just a continuation of the argument we had all during 1999, about the beginning of the 21st Century.

Well, as far as I'm concerned, the new decade starts with 2010, but however you slice it up, this century is moving along at an amazingly rapid clip, isn't it? And from a personal standpoint, it's definitely had its ups and downs. My mother and M's father both died in 2001, and M's 85-year-old mother is still recovering from a fall she had a year or so ago. But overall, I think the decade has been a pretty good one for us. The economic crisis that wiped out so many others hasn't been too hard on us. And although we've had a few health scares over the years, we seem to be doing pretty well at the moment.

2009 has been pretty smooth, but 2010 is shaping up to be a little more chaotic in our household. M will be retiring at the end of the year, and when that happens we'll most likely be moving back to the land of our ancestors. No, not England or Wales or France or Germany - just back to Texas, ya'll. Don't really know exactly where in the Lone Star State we'll end up - we've got several spots in mind. But wherever we settle, the move will be pretty momentous.

We've lived here in Virginia for just about twenty-five years now, and in this same apartment for twenty. Getting out of here is going to take a massive amount of planning, packing, and clearing out. It's going to be a year-long task, and not one I'm really looking forward to. I'm hoping that at some point during the year they'll announce that they've perfected the transporter and made it available for public use. Then we can just beam ourselves and all our stuff up and out of Virginia, and set everything down deep in the heart of Texas! Please tell me they're working on that technology right now!

OK, I guess that's enough pointless rambling for now. All I really wanted to say was Happy New Year, everybody.