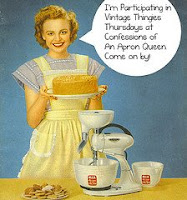 Vintage Thingies Thursday is hosted by Suzanne at Coloradolady, and as she says, "Thursday is the day to showcase your vintage treasures and to share your special things with everyone." Please visit her blog to find out more about VTT or to participate yourself. Some little girls are doll lovers and some aren't. I was definitely one. As a child, I always received at least one doll every Christmas. I guess that's where my tendency to collect things (dolls among them) got started. Several eons ago (well, sometime in the 1950s), I received my first Ginny Doll for Christmas one year. Designed by dollmaker Jennie Graves, the Ginnys were made by the Vogue Doll Corporation, and were 8-inches of very sturdy hard plastic. They were also adorable.

Ginnys were all the rage just before Barbie hit, and just like the Pink Princess, they had tons of outfits and accessories - all sold separately, of course. They were very addictive - so much so that I had to have another one the next Christmas. Well, I didn't want Ginny No. 1 to be lonely.

Not long after I received that first Ginny, I took her out into the backyard and took some photos of her and my other dolls, with my mother's old Kodak Brownie camera. The blurriness of the pictures probably reflects my photographic ability at about age seven, more than the quality of the equipment. Here are a couple of those original shots (click on photos to enlarge): 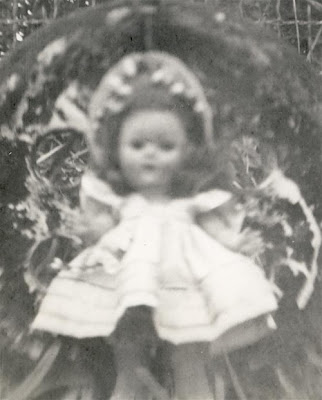 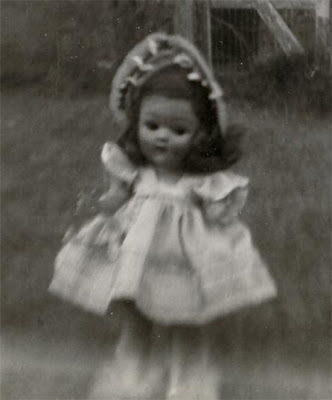 And as a testament to the longevity of those Golden Age toys, here's that same doll in the same outfit, some fifty years later, enjoying yet another Christmas. All I can say is I'm a Vintage Thingie myself, and I wish I'd held up this well. And a Merry Christmas to all! 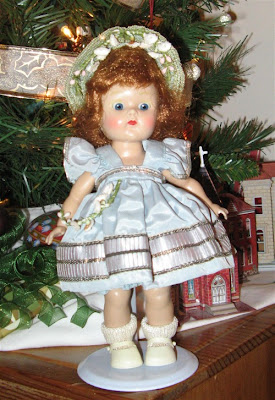 Added 12/25/2009: Just want to say thanks very much to the Holidailies panel of readers for choosing this post as one of the "Best of Holidailies" selections. I've read a lot of the other entries, and I'm not sure I'm really worthy of that company - there's some pretty impressive writing in the bunch. So it's quite a thrill!
Posted by jlshall at 11:01 PM