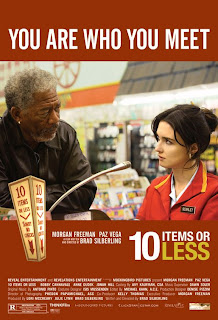 Written and Directed by: Brad Silberling

Once a world-famous movie star, Morgan Freeman's character (called only "Him" throughout the film) is now an aging actor who finds that his fear of failure has brought his career to a standstill. Now he's considering a role in a low-budget independent movie and, ever the professional, he's doing research for the role by spending a day in one of L.A.'s Latino community markets. While there, he's taken with the fiery young clerk (played by Paz Vega) in the "10 Items or Less" check-out lane, and when he's abandoned by his driver and can't remember his new home phone number, Scarlet agrees to drive him to his home in another part of the city. But Scarlet, who's hoping to get away from her dreadful dead-end job in the market, has a job interview scheduled, and as he rides along, the Movie Star gets involved in her plans. Their trek through Los Angeles takes them through unexpected situations and personal revelations, building an odd but compelling relationship that affects both their lives.

Wonderful little film, produced by Freeman. Funny and heart-wrenching by turns, it really should have gotten more attention. I'm a big Morgan Freeman fan – he never turns in a less-than-stellar performance, and he's amazing in this one. But the rest of the cast is pretty amazing, too – especially Paz Vega (a young Spanish actress I had never seen before although she's apparently a pretty big star in Europe) who plays Scarlet, and Jim Parsons (of The Big Bang Theory fame) doing a campy turn as a ditsy building company receptionist. Anne Dudek is also noticeable, as Lorraine, another check-out clerk; I kept thinking she looked really familiar but just couldn't place her until I found out she played Francine, Betty Draper's pal in Mad Men (my favorite TV show right now).

This one is definitely worth seeing. The DVD we watched also included a documentary about the making of the film which is also interesting if you're a film fanatic – it's almost as long as the movie itself, and very detailed. As M said, it's like a little tutorial in the making of low-budget independent films. But for us normal folk, it can get a little tedious – maybe your time would be better spent watching another Morgan Freeman movie.
Posted by jlshall at 7:45 AM