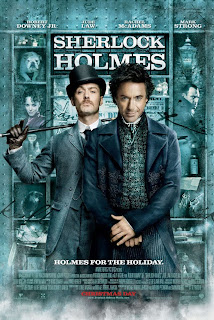 Sherlock Holmes
USA/UK, 2009
MPAA Rating: Rated PG-13 for intense sequences of violence and action, some startling images and a scene of suggestive material.

Sherlock Holmes (played by Robert Downey, Jr.), along with his trusted ally Dr. John Watson (Jude Law), investigates a string of brutal ritualistic murders in this 2009 effort from British director Guy Ritchie. When Holmes and Watson arrive upon the scene just in time to prevent the aristocratic villain, Lord Blackwood, from doing away with his latest victim, the evil lord warns them that death has no power over him. And, seemingly, he's right about that: After Dr. Watson witnesses Blackwood's hanging and pronounces him dead, Blackwood reappears in London and continues on his murderous path. Scotland Yard is flummoxed, but Holmes is back on the case. And as they search London for Blackwood in order to put a stop to his evil shenanigans, Holmes and Watson are involved in a world of dark arts and dangers more deadly and surprising than any they've faced before.

Boring movie, really; nothing but special effects – and extremely annoying special effects, at that. The characters of Holmes and Watson were completely unrecognizable, but since the film was aimed at an audience that obviously had never read the Conan Doyle stories, I guess that really doesn't matter. I suppose the fact that the movie was based on a comic book version of the Holmes tales (by Lionel Wigram) should be a good indication of what to expect. I know I'm fighting the entire trend of the 21st Century here, but I really long for the days when movies had real sets, real locations, and real actors.

And about those real actors – Robert Downey was as watchable as ever, but even his performance couldn't save this one. And Jude Law seemed to have abandoned Dr. Watson in favor of a sort of stiff-upper-lip portrayal of Wilde's Dorian Gray. I'm afraid the rest of the cast wasn't very memorable, but then they had all those special effects planted firmly between them and the audience.

We watched this one on DVD, so maybe the experience of seeing it on the big screen might have improved my opinion. But I doubt it.

Nutshell Review: The best thing about this movie was the poster.
Posted by jlshall at 6:00 AM