The Saturday 9 ("Just A Silly Meme on a Saturday!") is hosted by Sam Winters. Nine questions posted every Saturday — sometimes random, sometimes with a theme. This week, the theme is the Carpenter's I Won't Last a Day Without You. 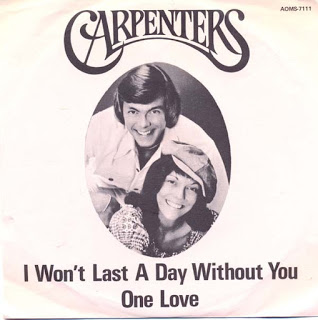 Before I start my answers, I should say that while I like some Carpenters tunes, I was never a wild fan of their music. I do love Karen's voice, though — it's so unapologetically alto, and she gets way down there where you really don't think she's going to make it, and then she does! I'm an alto too, but my voice simply gives out on those really low notes. But I wasn't familiar with this song, so I had to go listen to it on YouTube. Nice song, not great.