Saturday 9: No Gettin' Over Me 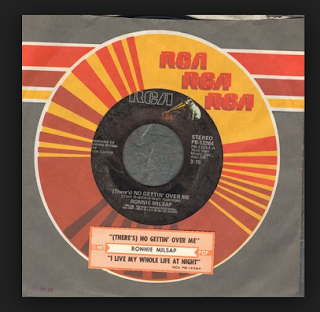 
1. Ronnie Milsap sings about how worrisome it can be when you realize you forgot to pay a bill. It's happened to all of us, hasn't it? Tell about a time you accidentally missed a payment.


I'm sure that's happened to me at some point, but I really can't remember the occasion. (I've probably blocked out the unpleasant memory.) Both the hubby and I are really too obsessive to forget about things like that. We've been paying most of our bills with automatic payments for quite a while now, just so we won't miss any. I can, however, remember back when we used to mail our bill payments every month, and once or twice I put checks in the wrong envelopes and sent them out. And that was way before I was old enough for "senior moments."

2. He also references a dream that keeps him awake. Do you have any recurring dreams?


I have several. None that keep me awake, though. Mostly connected with my former workplace — not exactly nightmares, but usually not very pleasant either. I also have these panic-attack dreams where I'm out somewhere trying to get home, and realize I've come out without my purse or keys or phone. When I was a child, I used to have a recurring dream about being locked up in a garage. (Good morning, Dr. Freud.)

3. He sings about the face you see in the crowd. Tell us about someone you see regularly, but don't really know.


Hmmm. That's a tough one. Well, we have nearby neighbors that I see now and then (maybe not "regularly") that I don't really know. Actually, now that I think about it, I don't even know their names.

5. Ronnie Milsap is a big fan of new technology, and believes the advancements make both his professional and personal lives easier. What about you? Do you embrace new technology? Or do you long for the good old days, when we weren't so connected to personal devices?


Yes, to both those questions. As George Carlin used to say, I'm new wave but I'm old school.

6. As a child, Ronnie used to surreptitiously listen to late night radio, especially gospel broadcasts. When you were a kid, what rule did you break again and again?


"Don't tease your cousin." That was a rule I just couldn't resist breaking. (My cousin MLB will know what I'm talking about. And I hope she doesn't hold a grudge.)

7. Country star Blake Shelton says Ronnie Milsap was a big influence on his music. Do you watch Blake on The Voice?


I have absolutely no idea who Blake Shelton is and I've never watched The Voice. Actually, I've only heard one or two songs by Ronnie Milsap, and had never heard this one before today.

8. In May, Ronnie appeared at the Choctaw Casino in Grant, OK. Do you enjoy games of chance?


I'm not a gambler. Games of chance make me nervous. And just getting through an average day is enough of a crap shoot.

9. Random question — When did you last "do it yourself" and repair something around the house or yard?


I happen to be married to a great repair man who loves fixing things around the house. So I don't really get a chance to DIY anything much. And I'm fine with that.