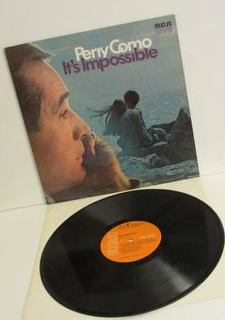 
1. In this song, Mr. Como maintains it's impossible to ask a baby not to cry. When did you most recently hold a baby? Did you ask him or her not to cry?


I cannot actually remember when I last held a baby. It's been a long, LONG time ago. And I have no idea what I might have said to him/her.

2. Perry Como was known for his casual, easy going style. Therefore people were surprised to learn that he could lose his temper. His long-time musical director reported that bad drivers really got under Perry's skin. What is one of your pet peeves?


Well, I've gotta lotta peeves. It's sort of hard to pick out a pet amongst them. The latest thing that set me off was the cable going off just before the end of a movie I'd been watching. I really hate when that happens. But I agree with Perry about bad drivers.

3. Though Perry Como was born in Pennsylvania, he didn't speak English until he began grade school. His parents were Italian immigrants and the family only spoke Italian at home. Do you know any words/phrases in Italian?


A few, mainly related to food and drink, or music. And things I've picked up from movies about the Mafia.

4. He met Roselle, the girl he would marry, when they were both still in high school. Tell us about a high school classmate you were crazy about back in the day.


I met my husband in high school. We were in the same class and started dating in May of our senior year, just before we both graduated. I was crazy about him then and I'm still crazy about him now. Other than him, there really wasn't anyone I was "crazy about" in high school — I dated a lot of guys, but never got hung up on anyone.

5. When he was just 14, his father's ill health made it essential that Perry begin working after school to help support his family. He apprenticed to a barber but was so short, he had to stand on a box when he cut hair. Again, going back to school, were you taller than your classmates? Shorter? Or were you the average height for a kid your age?


Well, for a while I was actually a little taller than most of the kids I went to school with. But around the age of 12, I stopped growing and a lot of them passed me up. Today I'm the same height I was in 6th grade.

6. While taping his annual holiday special in 1971, he fell from a platform and broke his knee. He had to wear a cast and endure 8 months of rehab. Have you ever broken a bone?


Never had a broken bone (pardon me while I do a little knocking on wood).

7. During the decades when he was a recording and television star, Perry Como was also an avid golfer. He was so popular that many of the best pro golfers of the day — Jack Nicklaus, Arnold Palmer, etc. — were happy to play with him. It's estimated that it takes about 4 hours to play 18 holes of golf. What celebrity would you most like to hang around with for four hours?


At my age, time is precious. And I'm not a celebrity watcher. I really can't think of a one that I'd want to spend that much of my time with.

8. After he retired, Perry's passion switched from golf to fishing in the waters near Palm Beach, Florida. His catch of the day often ended up as his family's dinner. What's for dinner at your house tonight?


Cheese ravioli with marinara sauce, and a green salad. And probably some Zantac later on.

9. Random question — They say "birds of a feather, flock together." But that's not always true. Can you think of an area where you are out of step with most of your friends/family?


Most of my friends are my friends because we "flock together" and have similar opinions about life, the universe and everything. Where family is concerned, though, I'm pretty much completely out of step with most of them, especially when it comes to politics or religion.