Andromeda for Our Time, or The Decapitation Follies 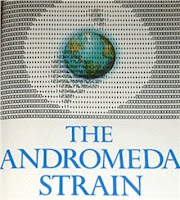 I've spent the last couple of evenings watching the updated film version of Michael Crichton's "Andromeda Strain" on A&E. I didn't know they were doing a remake, so I hadn't been waiting on the edge of my seat or anything. But I really enjoyed the book when I read it back in the '70s, and the 1971 film was always one of my favorite sci-fi flicks. So I thought I'd give this new incarnation a try.

It was produced by the Scotts – Ridley and Tony – and that was a great recommendation. Their TV show "Numb3rs" is very watchable. In fact, it's one of the few regular network shows I do watch these days. And Ridley Scott has directed and/or produced some of my all-time favorite films.

The cast sounded good: Benjamin Bratt, Eric McCormack and Daniel Dae Kim – well, what's not to love, right? And I've always liked Andre Braugher, ever since that show he used to be in, about cops in Baltimore ("Homicide"?). He has a certain Barack Obama-like arrogance and smugness which I can't stand in Obama, but find very attractive in Braugher for some reason. I even like Rick Schroeder, although I haven't really seen him in anything since "Lonesome Dove," back in the '80s.

So I had good feelings about the show. That is, before the first episode aired. After that, not so much. Well, it wasn't completely un-entertaining. It's just that it didn't really have much to do with the original novel. One of those instances where they take a perfectly good book and just use the title to riff on. I hate when they do that. Especially in this case because Crichton's original yarn was such a good one – it really didn't need a lot of techno twaddle and cgi frosting to make it appealing.

When they stuck to the original storyline, the show wasn't too bad. Unfortunately, that didn't happen very often. And all the additional "fleshing out" of the plot seemed like just that – filler. The show was definitely too long – the second night's segment was mostly just poor Eric McCormack wandering around in the desert, trying to figure out what he was doing there (he should've been forming plans to dump his agent).

I don't remember that thumb-hacking/throwing bit showing up in the original novel or film, either (am I wrong about that?).

And what's with all the decapitations? I know the special effects people have learned how to make it look appallingly realistic, so I guess they're determined to get at least one good head-lopping into every movie now. But one per show is enough, guys – especially after that guy cutting his own head off. We get the point. You're good. We really don't need to see you do it over again before every commercial break.

Oh, and I could have done without all those screaming Hitchcock birds, too.
Posted by jlshall at 5:42 PM