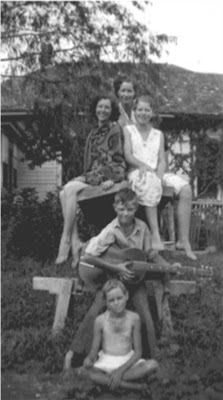 I know it's not quite officially summer yet, but it's looking and feeling that way more and more around here. So in honor of summer coming soon, I'm putting up one of my favorite summer time shots.

This is a photo of my father at about age eleven or twelve, with three of his older sisters. I'm told that the younger girl, down in front, was a neighborhood playmate. Possibly a cousin, since Daddy came from a huge family who mostly all lived in the same part of Texas when he was a boy.

The sisters were my Aunts Ella, Rosie, and (I think) Ader. They're all gone now, but they all lived good, long lives – well into their eighties and nineties. All except my father, the baby of the family, who died of heart failure at thirty-six.

But don't they look like they're having a great time? And while it looks like little Frank is doing his best Elvis impression, the photo was taken circa 1931-1932, so he must have come up with that smirk all on his own.
Posted by jlshall at 10:05 AM