When my husband's grandmother died, she left a wonderful collection of photos behind. And as I was the only one in the family who had any interest in genealogy or family history research, I inherited most of them. And this morning when I was looking around for some photo that would be appropriate for the month of July, this one caught my eye.

This is a snapshot of M's great-grandparents, Henry and Elizabeth Horn (or "Ma & Pa Horn" as it says on the back of the photo). He was born July 6, 1866 in San Antonio, Texas. And she died on July 23, 1960, at the age of 95, also in San Antonio. The picture was probably taken around 1920, in front of their house on their farm land near the corner of San Pedro and what became Basse Road. If you know anything about San Antonio, you'll realize just how much that area has changed in almost a hundred years. 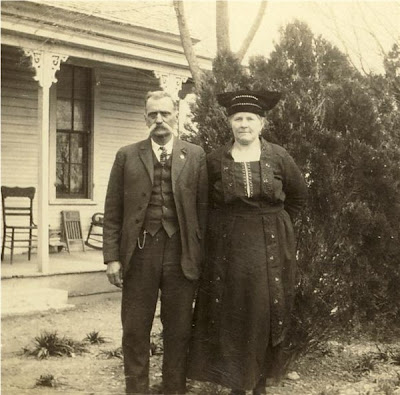 Henry Felician Horn was a member of one of the Alsatian families who settled in Bexar County around the time Texas became a part of the US. His mother and father were both born in France, and came to Texas by way of New Orleans in about 1856. Elizabeth Locke Horn (yes, "lock-horn" – you heard right) was an interesting character – I'm determined to write a book about her someday. Called "Lizzie" or "Hattie" by the family, she was the daughter of Texas pioneers from Tennessee and Illinois who came to San Antonio in one of the wagon trains of settlers sometime in the mid-19th century. She and Henry had six children, and my husband's grandfather was the next to the youngest. And although she's looking fairly serious here, in all the other photos I have of Lizzie Locke (that's how I think of her), she's always got a nice smile on her face – always looks like she was having such a wonderful time!
Posted by jlshall at 10:32 AM