Well, Labor Day has come and gone and suddenly it's autumn. Even after living up here in the north country for more than a quarter century now, I've never really gotten used to that abrupt change of seasons at the beginning of September. I grew up in a part of Texas where the warm summer weather could (and frequently did) last right up to Christmas Eve, and beyond! So I'm never prepared for the shortened days and brisk nights that appear here in Virginia, right after August makes its exit every year.

But it definitely feels like fall's approaching now. So, since all the schools in the DC area are back in session, and in honor of the back-to-school weather, I'm putting up a few nostalgic schoolyard shots from back in the school year of 195-something . . . well, sometime around the invention of the wheel. I was about six years old, in the first grade, and the day was actually near the end of the school year rather than the beginning (I was a "mid-termer," which meant that I hadn't been old enough to enter school in September, and had to wait until the following January – a complicated and antiquated system that was done away with a few years later). And, no – we weren't dressed up for any particular celebration. Believe it or not, this is just the way kids dressed for a normal school day back in the Pleistocene Era. 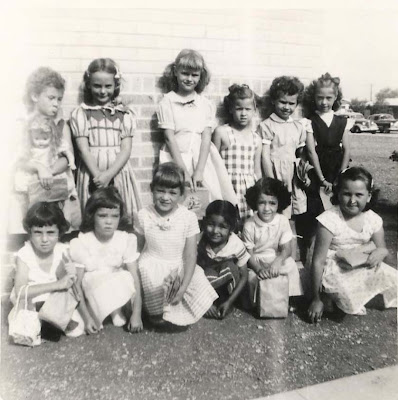 These were the girls in the class. My mother was taking the photos, and I'm not sure why she didn't get a shot of all the boys. Probably couldn't corral them long enough. I'm the one kneeling, second from the left, in the front row, with the sun in my eyes. Notice the "vintage" cars way over to the right. 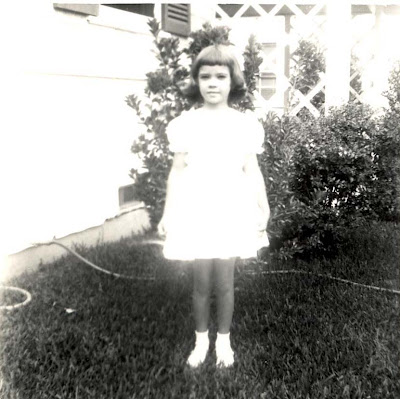 Me again, before school on the same day. Don't you love that garden hose snaking across the grass in the background? My mom wasn't one to sweat the details. 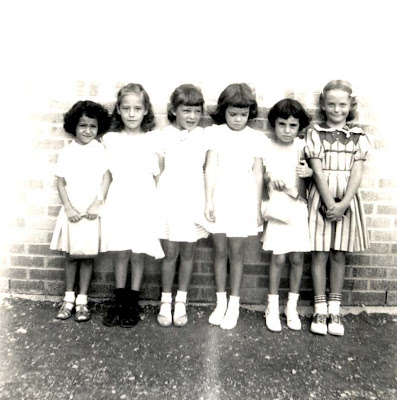 And one more. Here I am (third from the right) with some of my "special friends." I appear to be deep in thought, don't I? Probably wondering how long 'til lunchtime. You know, this shot reminds me – I was actually a pretty tall kid until we all reached puberty and everybody else kept growing! Darn that Mother Nature, anyway!
Posted by jlshall at 11:01 PM