Friday was my birthday. Never mind how old (old enough to know better, as my mother used to say). And this year I only got one birthday card – from my cousin MLB (thanks, Cuzzie!). We grew up together, and I can always depend on her for a card that cheers me up and brings me a few chuckles. Aside from that, the only birthday greeting I got was an email ad from Borders! Sad, but true – it's come to that. Well, my hubby did tell me "Happy Birthday" when he woke me up Friday morning, and he let me sleep late which was sweet. But there was no cute and mushy birthday card waiting at breakfast, and no nicely wrapped package containing chocolates or diamonds this year. Bummer.

But the thing that really made me sad was that there was no card from M's mom. Usually, I can expect my mother-in-law to remember even if no one else does. But she's been having a lot of health problems this year, and she's still recovering from a fall she suffered last November that left her with some pretty serious head injuries. So she's doing really well to remember her own birthday – can't expect her to be sending out birthday cards right now. And since my mother and grandmothers are gone now, I've come to realize (with something of a jolt), that I've suddenly become one of the matriarchs in both my family and M's. The ones who remember birthdays and keep track of all the family history. How did that happen? 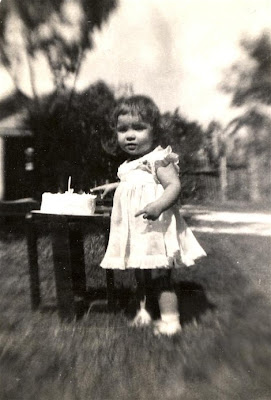 So, anyway, in honor of my own appearance on the scene, I'm putting up a shot of moi at my very first birthday party back in the foggy mists of time. Yes, I know it's self-centered and egotistical. But those are privileges that come with advanced age. And I know the photo is pretty blurry (well, I said it was the foggy mists of time, didn't I?) – but it's the best one of the bunch from that day. My mother was the photographer and she was never very handy with a camera. Generally, people in her photos ended up with no heads or only half a body, so this is one of the really successful shots!
Posted by jlshall at 9:55 AM