A few years ago, Michael and I started a sort of tradition of taking a photo of the two of us together, every Christmas Eve.  I guess nowadays that would be called a "selfie," wouldn't it?  Or is it a selfie if it's two people?  Well, whatever.  We usually take it in front of the Christmas tree or a wreath or something decorative (since we're not all that decorative ourselves).

Last year we forgot to take the photo.  So I really wanted to remember to do it this year.  Naturally, I forgot again.  But earlier in the afternoon on Christmas Eve, I snapped some shots of Michael while we were outside checking on some of the plants (and wondering why the nandina doesn't have any berries yet). 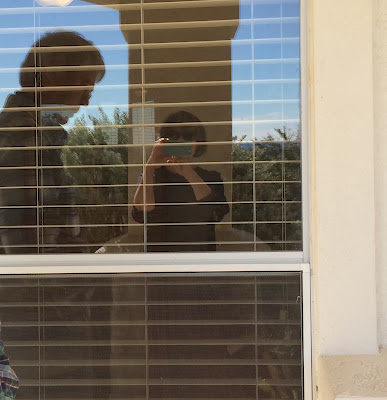 And when I looked at this one later, I realized I'd taken a photo of the two of us on Christmas Eve after all.  That's the hubby, plant-gazing - well, his reflection anyway (I did a little cropping).  And that's me reflected in the window too, taking the picture. And that's the bright blue Texas sky reflected in there, too!  And just because it's Blue Monday, here's another shot of that sky.  It really was a lovely Christmas Eve. 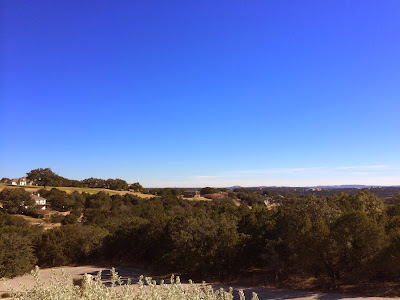 I'm also linking up with Holidailies,
even though I've really been doing a terrible job with that, this year.