Today's Holidailies prompt is about cooking for the holidays:


Share your favorite holiday recipe. Where / when did you first try it?

And the problem there is that I really don't do a LOT of cooking, during the holidays or at any time of the year.  Fortunately, I'm married to a man who's a great cook and actually likes to do it.  And when I do cook, it's pretty rudimentary - nothing fancy or notable.  So I have very few recipes worth sharing.

But I am a pretty decent baker, and in the past I used to do quite a bit of holiday baking.  Lots of different kinds of cookies.  Mince pies and pecan.  And several varieties of Christmas cakes, including a wonderful old-fashioned dark and bourbon-soaked fruitcake from a recipe I got out of an old Southern Living magazine (I think).  Here, I should say I'm probably the only person in the world who actually LOVES fruitcake - although with all the dental work I've had lately, eating fruitcake is really out of the question for me now. :(

But I digress a bit.  What I was aiming to say is that since I do (or did) like to bake at Christmas, my favorite recipe is my grandmother's recipe for applesauce cake.  She used to bake a bunch of these at Christmas-time every year; we had them at every holiday gathering I can remember from my childhood.  They were delicious, and after I grew up and got married, she passed the recipe on to me.  Mine were never as amazing as hers were (I think she must have whispered some unknown magic word over the batter), but they were still very tasty.  It's been decades since I tried the recipe, and I'm not even sure where I have it filed away.  But after my mother died and I acquired all her paraphernalia, I found my grandmother's old cookbook in the mix. 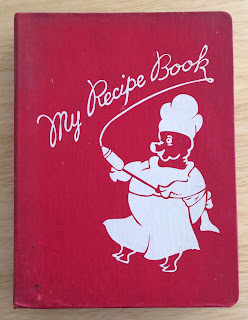 It's a notebook style book, with empty pages to write down your personal recipe collection, and envelopes to tuck in recipes clipped from magazines or newspapers.  Looks to be from the 1940s or possibly early '50s, and it has a lot of recipe clippings from magazines of that era.  It also has the applesauce cake recipe, which MaMa wrote out by hand: 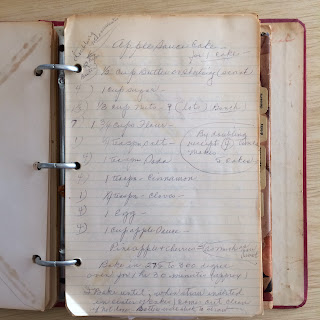 On the back of a page, she wrote the recipe, doubled (she says doubling four times will make five cakes). 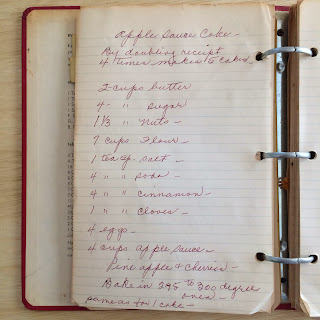 So now I'm having very mixed emotions.  In a way, I want to pull out my baking pans and give this another try.  But in a way, after all these years, I know the real thing can never be as good as those cakes in my memory.