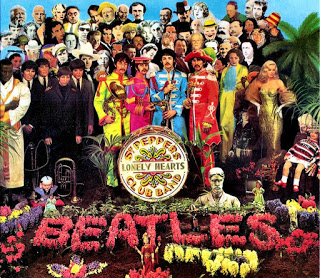 ...because I recommended it! Thanks so much!

1. The Beatles recorded this after they had taken a three-month hiatus from working together as a band. Do you find you're sharp after taking time off? Or does it take you a while to get back into the swing of things in your day-to-day life?


Well, I'm retired, so I suppose you could say all my time now is "time off." But I find that when we go on vacation or any other trip away from home, I do indeed need a day or two to sort of get back to normal.

2. During those three months off, John Lennon made a movie called How I Won the War. What's the last movie you watched? Did you view it at a theater, on TV, or from a device like a computer or tablet?


The last movie I watched was The Dunwich Horror, an old Sandra Dee/Dean Stockwell screamer based (loosely, anyway) on several horror tales by H.P. Lovecraft. It was on TCM a few weeks back and I DVR'd it, then the hubby and I watched it the other night. I had seen it before many years ago and wanted to see if it was as bad as I remembered it being.... It was.

3. Paul McCartney and George Harrison both used their time off to make new and different music. Paul composed instrumentals for a movie soundtrack while George studied sitar with Ravi Shankar. Ringo Starr spent those three months with his wife and their two little boys. If you had three months to spend doing anything you wanted, and money was no object, would you try something new (like Paul and George) or just kick back and relax (like Ringo)?


Again, I'm retired. So I could take three months and do pretty much anything I wanted with them. And I'm not really a big spender, so I suppose you could say money really isn't too much of an object. As long as it doesn't require a Trump-level fortune, I can probably do whatever strikes my fancy. My fancy usually just wants to stay home.

4. Paul recalls what fun it was to dress up in Edwardian-era costumes for the album cover. When did you last attend a costume party? What did you wear?


Wow, it's been a really long time. Like decades. Back in the 1980s and '90s, we had a group of friends and colleagues who would get together from time to time to have dinner, and read plays aloud. And sometimes we'd dress up in costumes to go along with the plays. We were expected to improvise the outfits — no rentals. The last time I remember doing that, I think the play was Private Lives by Noel Coward, and we all dressed up in late 1920s/ early 1930s outfits (the play was first performed in 1930). Here's a shot of moi dressed for the occasion, complete with cigarette holder and cocktail: 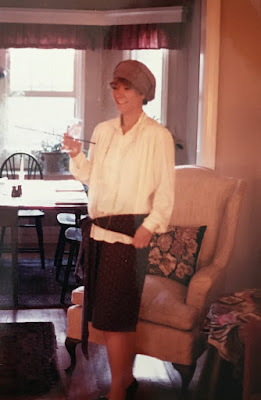 5. Paul says he came up with the name "Sgt. Pepper's Lonely Hearts Club Band" when Beatle friend Mal Evans told him about this great San Francisco band, Big Brother and the Holding Company. Paul hadn't heard their music yet, but he loved the sound of their six-word band name. Soon everyone would hear of Big Brother. Do you know who Big Brother's famous lead singer was?


If you're from Texas (I am) and lived in Austin during the 1960s (I did), you're most likely pretty familiar with Janis Joplin.

6. Sgt. Pepper's Lonely Hearts Club Band appeared on the Billboard charts for 175 weeks. Is this album in your collection?


It is. I have the original vinyl version and I think I have a CD of it too. Also on the iPod. Possibly in our Sonos music library too.

7. The Beatles are among the top-selling artists of all time in Zimbabwe and Ethiopia. Would you like to visit Africa?


Hmmm. I suppose it would depend on where in Africa I might be visiting. I'm not really a jungle enthusiast. Bugs. Snakes. Humidity. Big hungry animals with gigantic teeth. Quicksand. Malaria.... Bugs.

8. 50 years ago, when Sgt. Pepper was first released, the average price for gas was 33¢/gallon. When did you last fill up your gas tank? Do you remember how much it cost?


I don't pump gas. We just have the one car at the moment, and I don't really drive it a lot so I let the Hubs do the honors when it needs a fill-up. But I don't think we've filled the tank in the last week or so. Haven't used the car much this month because we've been doing a lot of redecorating work around the house and mostly staying home. I have no idea how much the last fill-up cost.

9. Random question: Are most of your married friends happily married?

Um. As far as I know? In general, I don't delve too deeply into my friends' marital relationships. I hope they're happy.