Saturday 9: Standing On The Corner 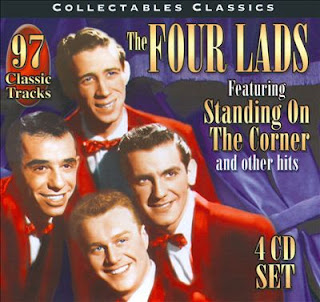 
I loved this song when I was a little kid. I heard it on the radio all the time and I thought it was very cool. Or whatever the 8-year-old, mid-1950s equivalent of "cool" might have been.

1. In this song, four friends congregate on Main Street to look longingly at pretty girls. In your town, where is the best place for people watching?


Well, I live in a sort of semi-rural area without a lot of places to congregate. To do any serious people-watching, we have to go into Austin or one of the other towns in this part of Texas. Which is always fun.

2. This song was written for the Broadway musical, The Most Happy Fella. Who is the happiest person you know?


One of our neighbors. She's absolutely irrepressible. Always in a fabulous mood. Always enthusiastic. Always ready to get out there and do something. (I'm exhausted, just thinking about it.)

3. The members of The Four Lads met at Toronto's St. Michael's Choir School. Growing up, did you attend parochial or public school?


Public. A lot of my cousins went to parochial schools, since all my father's family were Catholics. But my mother was relentlessly Protestant, and we lived just a few blocks from the nearest public school.

4. The Four Lads always wore jackets and ties when they performed. Do you enjoying dressing up? Or would you rather keep it casual?


I enjoy dressing up in the sense of wearing costumes -- for a play or a party. Otherwise, I prefer casual. At the moment, I don't think I own any clothing that could be called "dress up" clothing. Really need to do some shopping one of these days.

5. While this song was a hit for The Four Lads, they were completely overshadowed in 1956 by Elvis Presley and "Heartbreak Hotel." Who do you think dominates today's music scene?


No idea. I sort of lost interest in current music back around the turn of the century.

6. The Wizard of Oz aired on TV for the first time in 1956. Sam was never crazy about those flying monkeys. Tell us about something that frightened you when you were a kid.


OK, I won't get into my father's heart disease or my frequent childhood asthma attacks. And I wasn't terribly fond of those monkeys either. One thing I always remember as really frightening is the 1959 movie On the Beach, about a global nuclear war that ends all life on earth. The last earthlings have to wait around for the unstoppable lethal cloud to waft their way, and it just really traumatized me as a kid.


Well, Donald Trump, of course. But I guess mainly losing control, physically and/or mentally. And having something bad happen to the people I love. And being diagnosed with some deadly disease. Just like most everyone, I suppose.

8. Since this week's song is about pretty girls: 1956's Miss America was Sharon Ritchie of Colorado. Today Colorado has the distinction of being the home of more microbreweries than any other state in the union. Which are you most particular about -- your beer, your wine, or your coffee?


Definitely the coffee. I don't drink much beer, and the hubby is the wine connoisseur in our household. But I'm pretty picky about my coffee, I'm afraid.

9. Random question: We all have small, irritating habits, like soup slurping or not replacing the cap on the toothpaste. What's your nasty little habit?


Well, I don't know about any nasty habits. And I don't think I'd talk about them if I did. But I do have some irritating habits. The one that comes to mind right away is the way I go around humming all the time. I even irritate myself with that one. My grandmother and mother both did it too. I also talk to myself a lot, and ask myself questions. Drives my husband nuts. Says he never knows if he should be listening or not. (Well, shouldn't he always be listening to me?) But it's OK if he doesn't listen because I usually answer myself, too.