Two photos this week – family photos, both connected with the month of August.

The first is a portrait of my husband's grandfather, Milton Horn. He was born 9 August 1898, and looks to be about two or three years old in the shot, so I'm guessing it was taken circa 1900. He died in 1989 at the age of 91. His grandfather's family emigrated from Alsace Lorraine in the mid-1850s and settled in Bexar County TX. M always jokes about the fact that his family started out owning a huge chunk of San Antonio, but over the years managed to give most of it away. But even though he might not have had much of a head for business, Grandpa Horn always lived pretty much just as he pleased, and always seemed to be having a great time doing it. I think this is the only time I've ever seen him looking sad. 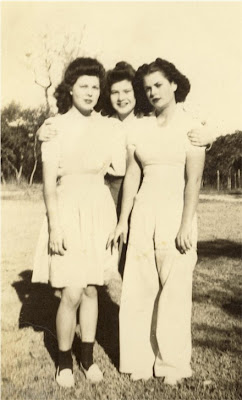 The second photo is a shot of my mother and her sisters, taken sometime during the early or mid-1940s. My mother is on the right, her sister Bette is on the left, and in the middle is the baby of the family, my Aunt Linnie (or Lynn, as she liked to be called) who would have been about 15 or 16 at the time. She died 13 August 1988, of cancer, at age 59. My cousin (Bette's daughter) and I both look a lot like her.

The relationship among the sisters was always prickly but close. My Uncle Pat, Bette's husband, used to say that in high school, they were famous for being difficult to handle. He said whenever anyone saw the sisters coming, they'd say "Here come those awful Davis girls"! Of course, he said it mainly to tease them, and my mother and Aunt Bette claimed not to believe him and vehemently denied it. But I believe it was true. And I think secretly they were sort of proud of being "those awful Davis girls."
Posted by jlshall at 8:18 AM