Saturday 9: The Rain, The Park and Other Things 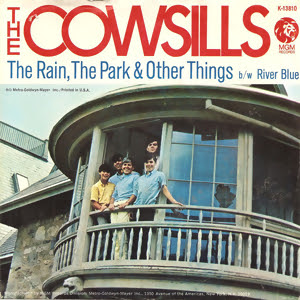 
1. The Cowsills were a family band who had three hit singles. Can you name another group of popular singing siblings?


The Osmonds, Jackson Five, Everly Brothers, Beach Boys (or were they cousins?), Pointer Sisters, Isley Brothers, Lennon Sisters, Bee Gees. I could go on, but they'd all be "vintage" groups — I haven't really kept up with more recent singing groups.

2. This was their first hit, and it reached #2 on the Billboard charts. It was kept out of the #1 slot by the Monkees and "Daydream Believer." What's your favorite Monkees song?


I like both of their "believer" songs — "Daydream Believer" and "I'm a Believer." But my favorite has always been "Listen to the Band," written by Michael Nesmith (hear it). I believe it was the first time they got to perform music actually written by one of the group. I was never really a Monkees fan, but they had some very good people writing their music — Neil Diamond, John Stewart, Carole King, Boyce & Hart, Paul Williams, and Nesmith himself. And even though they took a lot of flack for not being a "real" group, they were genuinely four very talented guys.

3. After seeing the Cowsill brothers perform with their mother and sister, TV producers were inspired to create the sitcom, The Partridge Family. Did you ever watch it?


No. I've seen clips from it over the years, but never saw a whole episode.

4. In the song, the narrator takes a flower from a girl in the park. Are there flowers in your home right now?


Not inside the house. I'm allergic to most flowers.

5. He isn't sure if the girl was real, or if he dreamed her. Tell us about a recent dream you had.


I don't really remember how recently I've dreamed it, but one of my most frequent recurring dreams is the one about being out somewhere and needing to make a phone call and discovering that my phone doesn't work, or I've forgotten how to use it (!), or I've left it somewhere. They tell me it's an anxiety dream and very common. Wouldn't be so scary if there were still any pay-phones around. Remember phone booths? I used to love phone booths.

6. At the height of the Cowsills' popularity, they were hired by the American Dairy Association to promote drinking milk. If we were to peek into your refrigerator right now, would we find any milk?


Only soy milk. The hubby and I are both slightly lactose intolerant.

7. After the band stopped performing together, John Cowsill went on to become a back up musician for the Beach Boys. His job has kept him on the road much of the time. When you travel, do you enjoy staying in hotels, or would you rather stay with friends/family?


I enjoy both, but I'm really not a great traveler, no matter where I'm staying. Don't think I'll be doing any traveling anytime soon, though.

8. In 1967, the year this song was popular, Elvis married Priscilla in Las Vegas. Have you attended any weddings yet this year? Are there any weddings in your future?


No weddings, for several years now. None coming up this year, that I know about. Which is just as well. I probably would not be eager to attend any big gatherings at the moment.

9. Random question: Are the bottoms of your feet ticklish?


Hmmm. I think so. Anyway they used to be. Nobody's tickled me lately. And isn't that just a little sad?