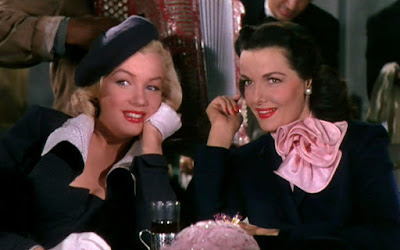 
1. This is from the movie Gentlemen Prefer Blondes. Have you seen it?

2. The lyrics tell us that, when love goes wrong, "a match won't light." When did you most recently light a match?


Probably the last time I lit a candle. And I haven't done that in the last couple of weeks.

3. The duet is performed at a French sidewalk cafe, where Jane Russell and Marilyn Monroe are (literally) sharing a cup of coffee. With whom did you most recently have coffee?


The hubby, this morning.

4. The tune was written by prolific composer Hoagy Carmichael. He was influenced by his mother, who earned extra money for the family playing piano during silent movies. Who in your life influenced your career choices?


This is sort of a sensitive subject for me. I always say I didn't really have a career -- I mostly just had jobs. I was more influenced by circumstances than by any one person.


Football. I'm not much of a baseball fan.

6. Jane and Bob Waterfield were high school sweethearts at Van Nuys High. The Southern California school was used as a set for the 1982 movie, Fast Times at Ridgemont High. Tell us something about your high school.


I went to the same high school my parents went to, although it had been relocated to a different part of town by the time I was a student there. It still exists, but it's been almost completely reconstructed over the last few years and really doesn't look the same. As far as I know, there have never been any movies filmed there.

7. Marilyn and Joe DiMaggio met on a blind date at a Hollywood restaurant called Villa Nova. Have you ever arranged a blind date? If so, did the couple hit it off and end up dating?


My husband and I once tried getting a couple of our friends together. They seemed to have lots in common and we thought they'd be the perfect couple. They met once, for lunch, and couldn't stand each other. Not something I'd ever do again.

8. In 1953, when Gentlemen Prefer Blondes was released, a tornado did severe damage to Waco, TX. Tell us about a major weather event that you endured (tornado, hurricane, flood, blizzard, heat wave, etc.).


Here we go. Actually, I'm sort of a magnet for bad weather. We were living in Chicago during the big blizzard in the winter of 1979-1980. It was the coldest, snowy-est winter they'd had in the 20th Century, and there were snowdrifts up to the rooftops of houses everywhere. The city couldn't do any snow removal because there was no place to remove it to. No traffic moved. We never knew how long the electricity would stay on. There was only one grocery store that stayed open in our neighborhood, and a trek there and back home could take all day. That experience was not fun and did not improve my opinion of snow. (But I loved Chicago, in spite of the dreadful weather.)

I've been around a couple of tornados — one in Louisiana, and one in Virginia that was actually pretty deadly. Fortunately, I've always been on the edge of the storms — close enough to see and feel them, but away from the major damage. I've also been through a couple of earthquakes — one in Mexico City and one while we lived in Alexandria, Virginia. The Virginia earthquake lasted for almost a minute plus several aftershocks. It was really very scary, especially since we were living in a highrise at the time. When you're several stories up in a building and the ground starts shifting underneath you, it's definitely terrifying.

9. Random question: You see a filthy puddle. Floating on top are cigarette butts, a leaf, and a $1 bill. Would you bend over and rescue the dollar?