Saturday 9: The Tide Is High

The Saturday 9 ("Just a silly meme on a Saturday!") is hosted by Sam Winters. Nine questions posted every Saturday — sometimes random, sometimes with a theme. This week, the theme is... 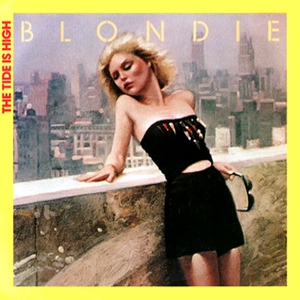 "The Tide Is High" by Blondie


Not familiar with the song? You can listen to it HERE.

1. This song was originally performed in 1966 by a Jamaican band called The Paragons. Jamaica is the most popular vacation destination in the Caribbean. What's your ideal vacation? (Relaxing on the beach, sightseeing in a new city, skiing the slopes, spending time with family, etc.)
Oooh, I've always wanted to go to the Caribbean. Well, I love sightseeing in a new city, but I think my ideal vacation definitely involves a beach. Last year we visited Hawaii for the first time. Stayed in Honolulu in a hotel right on Waikiki Beach. The ocean in one direction, high-end shopping in the other. Lots of gorgeous scenery all over the place. For me, that was pretty much as close to ideal as I'm likely to get.

2. In this song, Debbie Harry sings that she's not the kind of girl who gives up easily. How about you? Do you hang on stubbornly? Or do you know when to say "when?"
Well, I'm pretty stubborn about some things. And I really don't do well with change. (M and I are both like that — if we do something the same way twice, it becomes a tradition and must be continued.) So I'm not usually one to give up without a fight. But yeah, I do know when to say "when."

3. Blondie is a group that took its name from the lead singer's most identifiable characteristic, her hair. If your band was named after your hair, what would it be called?
Dishwater.

4. Before her career as a singer took off, Debbie supported herself as a waitress. She even served drinks while wearing bunny ears and tail at The Playboy Club. Have you ever worked in food service?
No, fortunately (or maybe unfortunately) I learned to type and take shorthand in school. So I could always manage to support myself with an office job. That got both the hubby and me through college. The jobs were boring, but dependable.

5. Debbie points to David Bowie as a major influence on her music and career. What's your favorite Bowie song?
It would be a toss-up between Space Oddity and Changes.

6. In 1980, when this song was popular, the best selling issue of Rolling Stone featured Robert Redford on the cover. Who is your all-time favorite actor?
Movie actor? All-time favorite? That's tough. Probably Humphrey Bogart. Or maybe Steve McQueen. Talking about living actors? Hard to choose. Maybe Morgan Freeman — he's always great, even in throw-away roles. (Robert Redford would be a good choice, too.)

7. In 1980, Ted Turner revolutionized how we watch TV when he introduced CNN. Do you have any subscriptions services in addition to cable -- like Hulu, Amazon Prime or Netflix?
We have a Netflix subscription that we use a lot. And I guess my Amazon Prime account does give me access to movies, but I've never tried it out.

8. John Lennon was murdered in 1980. Today there's a specially landscaped section of Central Park called Strawberry Fields in his honor. If you had a day to spend in New York, what would you want to see?
I think it would depend on the time of year and the weather. I've been to NYC many times, but not very recently. If I had only one day, I'd probably spend it just walking around, taking it all in. Or maybe head for the Metropolitan Museum — it's been quite a while since I visited there, and I'd love to see the Temple of Dendur again. And a stroll through Central Park would be nice too, especially in the spring or fall. But my favorite time to visit New York was always around Christmas time, so I could look at all those amazing holiday window decorations.

9. We're going shopping! Which do you need to add to your wardrobe: underwear, shoes or a swimsuit?
Well, I bought several new swimsuits last year, and I'm pretty sure they still fit — so I don't really need to shop for any more. And underwear? Actually, I'm pretty well stocked in that area, too. Now shoes — I always need to shop for shoes. Even though my closet is already crowded with dozens of pairs I hardly ever wear. (I'm a bit of an addict when it comes to shoe shopping.) You know, now that you mention it, I should probably head on over to Zappos and order a couple of pairs right now!