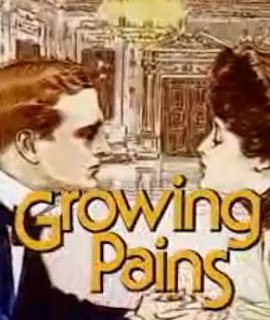 As Long as We Got Each Other (Theme from Growing Pains)
... because it's Father's Day weekend


Unfamiliar with this week's tune? You can listen to it HERE. 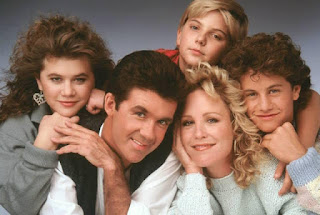 I used to watch this show pretty faithfully when it first appeared, but I didn't remember the theme song at all. When I think of it now, mostly what I remember about the show (or about any TV shows from that period) is the big hair and shoulder pads.

I stopped watching the show after the first couple of seasons, before the fourth child came along.


1. This is the theme from the 1980s sitcom, Growing Pains. Alan Thicke played Dr. Jason Seaver, one of TVs popular dads. Who is your favorite TV dad?

Uh-oh. You're gonna be sorry you asked that question. I have a list.

I don't have a current favorite, mainly because I don't really watch many family-type shows these days. But I have a list of great dads from older shows.

Probably my FIRST favorite TV dad (way back before any of you guys were born; possibly even before your DADs were born) was Jim Anderson on Father Knows Best, played by Robert Young. He was always so patient and nice to everyone. Never lost his temper. Never did anything mean or dishonest. Always wore suits and ties to work. And he always knew best. Well, actually it frequently took a whole show and some intervention from Mrs. Anderson (played by Jane Wyatt) before he finally figured out what was best. But in the end, everything always worked out nicely. A real dream world dad.

But I have other favorites. Just a few: Hal from Malcolm in the Middle (played by Bryan Cranston), Joseph "Rocky" Rockford from The Rockford Files (played by Noah Berry, Jr.), Homer Simpson from The Simpsons (voiced by Dan Castellaneta), Frank Costanza from Seinfeld (played by Jerry Stiller), Ben Cartwright from Bonanza (played by Lorne Greene), Sheriff Andy Taylor from The Andy Griffith Show (played by Andy Griffith, of course). And Cliff Huxtable from The Cosby Show, played by Bill Cosby (whatever he may or may not be guilty of, Cosby created a wonderful father figure in that show).

2. Joanna Kearns, who played Jason's wife, reports that she teased her costar by calling him, "Al," a nickname he hated. Is there someone in your life that you enjoy needling?

Not really. I don't like to be needled, so I try very hard not to needle.

3. For most of the series, the Seaver children each represented a "type." The oldest, Mike, was the trouble maker. The daughter, Carol, was the brainiac. Young Ben could be very high maintenance. Which of the Seaver kids were you most like when you were growing up?

Well, I definitely wasn't a "brainiac." And I was always sort of a rule-follower, so I was pretty well-behaved. I suppose if I was like any of them, it would have been the high maintenance one, although no one ever called me that. Back in my day, kiddies, if you got too "high maintenance," you got smacked.

4. In the song, BJ Thomas sings about being "the luckiest dreamer who never quit dreaming." If you could have any dream come true this Saturday, what would you wish for?

5. When he mans the grill, Sam's father proudly wears the "Kiss the Chef" she gave him for Father's Day years ago. Tell us about a gift you gave someone that was a hit.

I am a terrible gift-picker. I never know what to give anyone, and have a really hard time shopping for Christmas, birthday or anniversary gifts. Some of my gifts don't flop as badly as others, but I honestly can't remember any of them ever being what you'd call "a hit." Sad.

6. Sam's dad takes his grilling very seriously and jealously guards his special marinade recipe. Do you have a secret you haven't even shared with family members?

7. He recommends using a grill basket when barbecuing vegetables so you don't have to worry about them falling through the grill. Share one of your culinary tips with us.

Fresh basil can really perk up a frozen pizza.

8. Sam's father hates it when she swears. What's the last curse word you used?

Cannot be repeated here. Since the election back in November, I've been swearing a lot more than usual.

9. Sam's father satisfies his afternoon sugar craving with an almost endless stream of Butter Rum Lifesavers. When you crave a snack, do you usually want something sweet or salty?

Usually salty. Unless there's chocolate in the area.