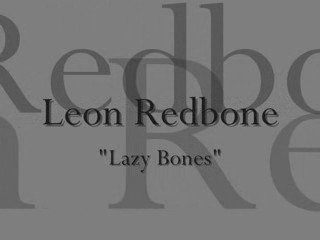 If you're not familiar with the song, you can listen to it HERE.
And you can hear it done by the song's composer Hoagy Carmichael HERE.

I liked Leon Redbone back in the '70s, although I don't think I ever had any of his records. He was always such a mysterious character, and no one seemed to know anything about him. Of course, this was way back in the distant dark ages before the Internet and Google and Wikipedia put all information on everything/everyone right at our fingertips twenty-four hours a day. For a while we didn't even know his first name — he was just "Redbone."

1. This song is about a guy who'd rather nap than do his chores. Are there things you should be doing right now, instead of hanging around the blogosphere, answering these questions?

Well, I'm retired. So, technically anyway, I can do whatever I want whenever I want. That said, I imagine I could find any number of more productive things to be doing right now. I just don't wanna.

2. This song mentions a lazy afternoon of fishing. When did you last go fishing?

Wow, it's been a really long time. Maybe like thirty years or more. M's parents used to own a place on Lake Buchanan (in a little town called Tow, TX), and we fished there at least once. Back in the 1980s, probably. I'm not really a fisherman (fisherwoman?) — although I do like looking at all those cute little lures and gadgets. And I can bait a hook. But I just find it all pretty boring. And smelly. So I'm not likely to say anything like "Honey, why don't you ever take me fishing?"

3. The lyrics catch our hero sleeping in both the sun and the shade. Do you have a nice, shady place to nap on your front lawn? Or would we catch you lying in the sun?

We do have some nice shady places to nap in our yard. M has even talked about putting a hammock out there. And I would love to lie around in the sun and get a beautiful deep tan. But I have asthma and I'm allergic to pretty much the entire outside world. So if I do any napping, it's going to be indoor napping.

4. This week's featured artist, Leon Redbone, is a difficult man to nail down. Over the years he's claimed to be born in Ontario, and Philadelphia, and even Cyprus. Tell us about a time you got caught in a fib.

No way. Some things are best kept under one's hat if one knows what's good for one. This one does.

5. Mr. Redbone has said that taking himself too seriously would be "the gentle kiss of death." What's something that you always take seriously and just can't joke about?

Well, I take a lot of things seriously — M's health and safety, my health and safety, how I feel about the people I love, our rights as citizens of a (relatively) free and (at least for the time being) democratic nation. But, even so — I can joke about most everything. Which is something I have to be very careful about.

6. He has retired from public life, and that includes his Facebook page, which is no longer available. What did you last post to your Facebook page?

Not really a Facebook fan, so I had to go look this up. On May 23rd, I posted a notice about Roger Moore's death (very sad news). And before that, I posted in March when Chuck Berry died. I don't check in with Facebook very often, and when I do it seems like I just post death notices.

7. Leon always wore dark glasses when he performed. Do your sunglasses have gray, green, brown or rose colored lenses?

8. Recently Dick Van Dyke performed this song at a charity benefit, aided by his a capella quartet, The Vantastix. Last year, at age 90, he campaigned for Bernie Sanders. So Mr. Van Dyke is certainly not a "lazy bones." Who's the most active, energetic person in your life?

That would be the hubby. M is much more energetic than I am. Fortunately — or we'd never get anything done around here. I'm definitely more of a lazybones.

9. Random question: You're at dinner with friends and someone begins a very long joke with, "Stop me if you've heard this before." You have heard it, many times before. Do you stop him? Or do you just sit through it again?

Depends on how close a friend, and who else is there. And if it's the Hubs telling the joke, I'd just pretend I'm hearing it for the first time and let him roll.