The Saturday 9: Listen to the Music 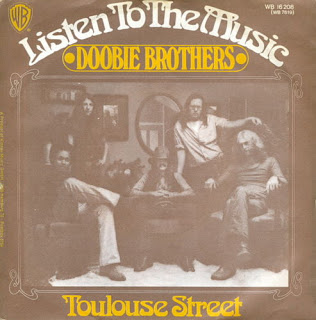 
Unfamiliar with this week's tune? You can listen to it HERE.


1. The lyrics say, "What the people need is a way to make them smile." What song lifts your spirits and makes you smile every time you hear it?


Wow, so many. It would be hard to settle on just one, although this one definitely does it. And "China Grove," also by the Doobies. But lots of others, especially "Come on Eileen" by Dexy's Midnight Runners. (You can see the video for that one HERE.) "I Get Around" by the Beach Boys. "Pretty Woman" by Roy Orbison. "Sweet Caroline" by Neil Diamond. "You Never Can Tell" by Chuck Berry. And "I Saw Her Standing There" and "Twist and Shout" by the Beatles, for very personal reasons. All of them golden oldies, but then so am I.

2. Lead vocalist/composer Tom Johnston reports that he's made a lot in royalties because so many radio stations use this as a jingle. Tell us a jingle that sticks in your head.


Fortunately, I really haven't had any jingles sticking in my head lately. But somebody has been using Aerosmith's "Dream On" in a commercial recently, and every time I hear it I go around sort of squealing "Dream On" for a while, in my best Steven Tyler falsetto.

3. The Doobie Brothers got their start in San Jose, California. San Jose is the largest city in Northern California, thanks to all the tech companies that have headquarters there. Let's talk about the device you're on right now: are all your applications up to date?


Probably. Even though I'm not very tech savvy, M is and he does a great job of keeping everything updated and running smoothly.

4. When they were still a local band, the Doobie Brothers had a strong following among bikers. Are you attracted to biker culture?


No, but I do like motorcycles. M had a Honda many years ago, and it was lots of fun. But people in cars kept running into him, so we eventually sold it.

5. This week's song is from Toulouse Street, which is considered their "breakthrough" album. Tell us about a moment in your own life that you consider a "breakthrough."


I've certainly had some "breakthrough" moments, but they're not really things I can share here on the blog.

6. In 1987, the Doobie Brothers did a benefit performance for Vietnam Veterans at the Hollywood Bowl. Next to the Beatles, it was the fastest-selling ticket in Hollywood Bowl history. Which group do you listen to more often -- the Doobies or the Beatles?


I love the Beatles and the Doobies both. But these days, I listen mostly to jazz.

7. In 1972, when this song was popular, Wranglers were America's best-selling jeans. Are you brand-loyal to one jeans manufacturer?


Not really, but I do seem to have more Gloria Vanderbilt jeans than other brands in the closet right now.

8. Grocery stores saw seafood prices fluctuate wildly in 1972 because of a series of confrontations between the United Kingdom and Iceland regarding fishing rights in the North Atlantic. (Iceland won.) What was the most recent seafood dish that you enjoyed?


Well, the other night we had a salmon salad that was very tasty. But last weekend, M made his famous grilled tuna steaks with pico de gallo garnish. Extremely delish!

9. Random question: Which of these "top ten" lists would you prefer to be on -- the sexiest, the smartest or the richest?


Um, not sexiest. Even when I was young enough for that to be a remote possibility, I wouldn't have picked that one. Once upon a time I probably would have said smartest. But we seem to have entered a new age where being smart isn't as big an asset as it once was. So maybe richest is the best way to go, in this brave new Trumpian era.