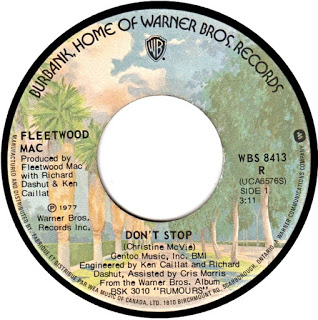 
1. Since we're not supposed to stop thinking about tomorrow, let's talk about it: What are your plans for Sunday?


We'll probably try to finish clearing out the rooms we're redoing, since the carpet guys will be coming next week to install the new carpet. We've lived in this house for five years now, and have been meaning to get these two rooms re-carpeted for nearly that entire time. Put it off because it seemed like such a massive job — one of the rooms is home to all our books, and we figured moving them would be a real pain. It was.

2. Fleetwood Mac was formed 50 years ago in London. Fifty years is considered a "golden anniversary." Do you wear more silver or gold?


I don't wear a lot of jewelry — mostly just earrings. But I do prefer gold to silver. Gold doesn't tarnish or make my skin itch.

3. This song is from Rumours, which has sold 40 million copies. Is it in your collection?


Yes. It's in my old vinyl collection, and I think I have the CD, too. It's also probably on my iPod, but I don't really listen to that much anymore. 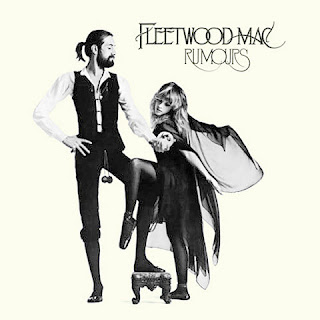 4. It was written by keyboardist and vocalist Christine McVie. She was born Christine Perfect, a name that earned her a fair share of teasing when she was a school girl. Do you recall being teased in school? What about?


I'm sure I was, but it wasn't especially memorable. Just the normal stuff. Don't remember any bullying, or anything particularly nasty.

5. Before Fleetwood Mac, she was in a band called Chicken Shack. If you were to order out for a chicken dinner, which restaurant would you turn to?


Well now, that would be a problem. Where we live, there just aren't any restaurants near enough to have food delivered. If we went out for dinner, we probably wouldn't choose a place that specializes in chicken because the hubby has stopped eating chicken.

6. Before she could pay all her bills with her music, she supported herself as a window dresser for a London department store. Do you enjoy walking along, just window shopping? Or do you consider "looking with no intention to buy" a waste of time?


I do like to window shop. Don't get to do much of it these days, since I do most of my shopping online.

7. When she found herself making big money, one of the first things Christine bought was a pair of matching Mercedes for herself and then-husband, John McVie. If you were handed a check for $1 million, what's the first thing you would do with the money?


Well, I know this is a terribly un-feminist admission, but probably the first thing I'd do is hand the check over to the hubby. He handles all our financial doings, since he's much better at it than I am. Then I'd most likely start giving some of it away, and spending some of it on toys.

8. The other girl in Fleetwood Mac, Stevie Nicks, founded the Soldier's Angel Foundation. She believes in the healing power of music, and so she's proud to provide wounded soldiers with iPods already loaded with music. When you listen to music from your phone, MP3 player or iPod, do you use ear buds or headphones?


Actually, I never listen to music on my phone, and it's been quite a while since I used my iPod. We have a Sonos sound system in our house, and that's mainly what I use for listening to music. I've never really liked using headphones or earbuds.

9. Random question: Let's pretend your high school reunion is coming up. Which classmate are you more curious about: the one who was your first date, or the one who was too cool to give you the time of day?


My first date happened long before I got to high school. And I've avoided all my high school reunions. Must admit, I'd be curious about both "first date" and "too cool," but probably not curious enough to get me to the reunion.