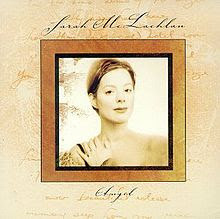 
1. Sarah McLachlan wrote this song about someone she barely knew. She read the obit of Jonathan Melvoin, keyboard player for the Smashing Pumpkins, who died of a heroin overdose. What's the most recent news story that touched you deeply?


Well, first of all, I'm very sorry to hear about Jonathan Melvoin, even though I had never heard of him before and don't really know anything about Smashing Pumpkins. And honestly, aside from political news, I don't actually pay a great deal of attention to all the current event stories going around. But the story of Charlie Gard, the English infant on life support, was one that caught my attention recently. Very sad.

2. Ms. McLachlan performed this in tribute to Linda McCartney at the 1999 Concert for Linda. She was expressing her hope that, in death, Linda found relief and peace after a long and painful battle with cancer. What do you think happens to us when we die?


Wow. Well, I'm not religious, so I don't really believe in any sort of afterlife heaven or hell. I do, however, believe that energies can somehow linger on. OK, folks — I'll just go on and admit it — I've seen ghosts. And that's hard to square with the "no afterlife" theory. Guess I should just say "Not sure" and leave it at that.

3. Daytime dramas General Hospital and As the World Turns used this song on-air after a major character died. Do you follow any "soap operas?"


Just the ongoing Trump Family Saga — does that count? Seriously, I didn't even know there were any soaps left. Thought they'd been replaced by talk and game shows. For a while back in the '70s I watched All My Children pretty seriously, but never followed any of the others. But I'm old enough to remember the ones my mother used to listen to on radio — The Guiding Light, One Man's Family, Our Gal Sunday, Lorenzo Jones, Backstage Wife, Young Widder Brown.


No pets at the moment. When I was a child, I had a parakeet that flew into our yard one day, and got captured by my father. We named him Tweety because he told us that was his name (yes, he really could talk). He used to imitate my mother calling my name in the mornings to wake me up. Also had a wonderful toy fox terrier given to me by a neighbor of my grandparents. And the hubby and I used to have cats that came from a grad school friend who had taken in a mamma cat with a bunch of kittens.

5. She admits she can't watch those ASPCA commercials, where her recording of "Angel" plays over sad photos of animals. Is there a TV commercial that really gets to you (in either a good or a bad way)?


Yes, those ASPCA commercials. I feel the same way — just can't watch 'em, even though I'm an animal lover and an ASPCA supporter. I switch channels, or mute the sound, or leave the room when one comes on. Aside from that, there are many, many, many TV commercials that "get to" me — usually in a bad way. I do like funny commercials, though. Here in central Texas, we have a supermarket chain (HEB Stores) that makes commercials featuring players from the San Antonio Spurs basketball team, and they're always very funny and clever and fun to watch.

6. In 1994, Sarah was stalked by an obsessed fan. Tell us about a time you were really frightened. In retrospect, was your fear commensurate with the threat?


I'm a very nervous person. Many things make me jumpy. I worry a lot. But I don't really frighten easily. (OK — tornadoes do sort of terrify me. And I definitely try to stay away from these giant hornets we've got around here.) Most of the time I can reason myself out of being afraid of things. I suppose the one time I can remember being really frightened was when my father died. I was ten years old, and pretty much scared out of my wits. Was the fear commensurate? I'd say yes. The world as I had known it up to then just changed overnight. Life reorganized itself. I got on with it, but nothing was ever the same.

7. Sarah was adopted by Jack and Dorice McLachlan. Though she has a friendly relationship with her birth mother, she always considered Dorice her mother and sees herself behaving with her son the way Dorice did with her. Is there anyone in your family that you feel you resemble, either physically or by behavior?


Definitely. In fact, the older I get, the more I seem to look and behave like many of my family members — my mother and father, both my grandmothers, several aunts, and especially one cousin. I guess whether we like it or not, heredity eventually catches up with us.

8. McLachlan is one of the founders of Lilith Fair, a summer concert series designed to showcase talented female performers. Do/did your summer plans include an outdoor concert?


No plans for any concerts, outdoors or in. Actually, I haven't been to any kind of concert in quite a while. And I don't do a lot of outdoor activities this time of year. Even at night, the heat in this part of Texas makes that kind of unappealing.

9. Random question: Which of these men would you most like to be seated with at dinner -- Clint Eastwood, Prince William or Jimmy Fallon?