In the 265 years we've been married (OK, that's just a slight exaggeration), M. and I have always owned cars that were either blue or silver. We're nothing if not consistent. Or maybe just unimaginative. We started out with his high school dream machine – a frost blue metallic '57 Ford Fairlane. Yes, it was a hotrod and he had "built" it himself. Custom interior. Baby moons. Dual quads. Three miles to the gallon, but a beauty.

Our second car – the one we bought while we were still in college and finally broke down and admitted that the Ford was just too undependable to get us to work and class on time – was a model of practicality: a dark blue MG Midget. It was a lot of fun to drive in fine weather – when it rained, you got wet, even with the top up. If you were foolish enough to take it on the highway (which we did, on a regular basis), you either drove with the top down and allowed the wind to batter you to a whimpering pulp; or you put the top up and had to hold it down manually to keep the wind from blowing it away. Ah, those were the days! 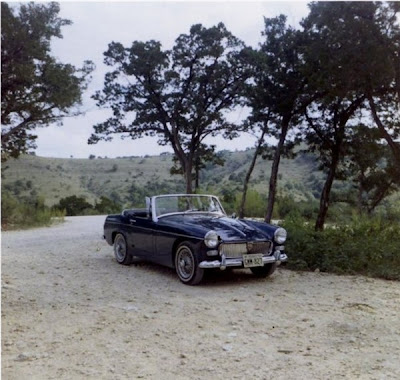 Lately, I've been looking at a lot of our old photos and slides, and was surprised to find that I have quite a few black and white shots of the Ford, but not a single one in color. And not many of the MG. Which is odd, since I've always been a fiend about documenting our lives in photos. Anyway, this is an image from the early days, when the tiny monster was still in relatively new condition. Taken somewhere in the Texas Hill Country, near Austin, one summer day about a million years ago.

For more Blue Monday offerings, or to participate yourself, please visit Smiling Sally's blog.
Posted by jlshall at 6:00 AM