It's a cold day in Washington DC today, but the thousands of people who've come to watch and celebrate the inauguration of Barack Obama don't seem to mind the low temps. Their enthusiasm and excitement will keep them warm.

I know this inauguration day is particularly historic. The eyes of the world are focused on Washington DC today, and rightly so. The election of an African-American President has been a long time coming and is vastly overdue. But personally, I'll always see the 1993 inauguration as probably the most important and memorable. For one thing, it was the first time in many years that the candidate I had voted for was actually the person being sworn into office; I had thought that would never happen. Also, Bill Clinton was the first Baby Boomer to become President – and that was a very big deal for me. 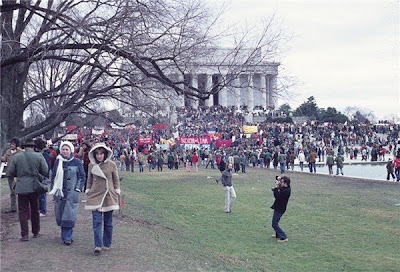 The other inauguration I'll always remember is/was the 1973 swearing in of Richard Nixon. It was memorable because I was in Washington DC that day, attending not the inauguration, but the "counter-inaugural" demonstration. We were living in Baltimore MD at the time, and I believe we drove into Washington for the day – security was a lot looser in those days, and there were no metal detectors, no checkpoints, and no Metro. As I recall, the Smithsonian museums were all open that day, and we popped in there occasionally to take refuge from the cold. These are a couple of the photos we took that day – one is a shot of the crowds near the Lincoln Memorial, and the other is yours truly (with a friend) on the edges of the chaos. 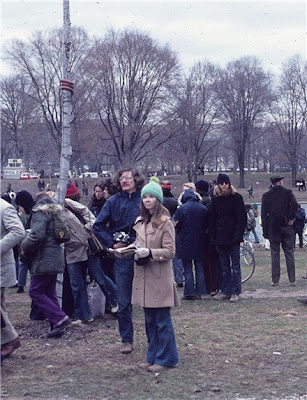 Well, now I live even closer to the District. But I'm not venturing in for today's festivities. My inclination these days is to stay as far away from that sort of activity as possible. I'll watch it on TV, and I wish the very best for our new President and his family.